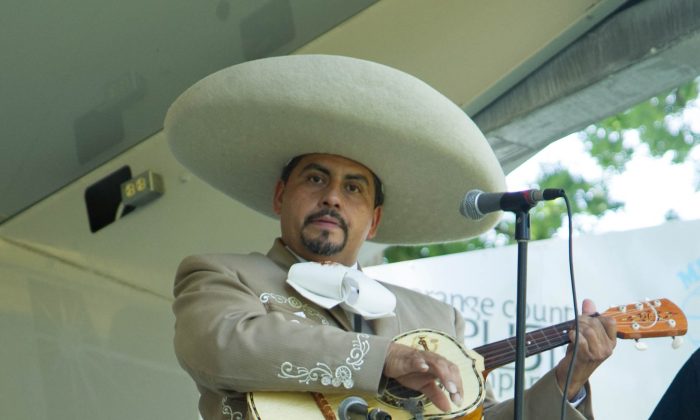 The lead vocalist for Mariachi Solido at the Latino Festival in Middletown on June 14, 2015. (Holly Kellum/Epoch Times)
New York

Middletown Latino Festival: A Party with a Purpose

MIDDLETOWN, New York—The heat that got into the 80’s did not deter the several hundred people who showed up for the Latino Festival in Middletown’s Thrall Park on Sunday.

Organizer and founder of the event, Edwin Ramirez, said he thought the festival grew this year, despite the heat and New York City’s Puerto Rican Day Parade happening on the same day.

“It’s like all the events I organize throughout the Hudson Valley,” said Ramirez, who is the owner of R&M Promotions. “You plant the seed one year and you watch it grow.”

He says they are not just a chance to celebrate the Latino culture—close to 40 percent of the Middletown residents identify as Latino—but an opportunity for Latino students as well.

The inspiration for the festivals came from his wife who was a teacher in 1999 when she noticed there was a lack of scholarships for Latino students going to college.

Although undergraduate Hispanics received the second highest amount (85.2 percent) of financial aid after blacks (91.9), according to 2006 data from National Center for Educational Statistics, they still are behind other demographics in terms of education level achieved.

Close to 40 percent of the Middletown residents identify as Latino

According to 2007-2011 Census data, 20 percent of Latino adults 25 and older have an associate’s degree or higher, as opposed to 36 percent for the rest of the population.

Ramirez and his wife decided to create the Latino High School Scholarship Program, which awards $500-$1,000 college scholarships from the proceeds left over from vendor fees and sponsorship money from the festivals. Ramirez said they have awarded 111 scholarships since they started 16 years ago.

The festival, which featured a live Mariachi band, Zumba lessons, kids games, face painting and foods like churros and empanadas, was also about what Ramirez calls “the richness of the culture” and making people proud of where they come from.

So many of our community members are involved in mixed marriages and for the most part, a lot of them tend to put their culture to the side
— Edwin Ramirez, Organizer, Latino Festival

“So many of our community members are involved in mixed marriages and for the most part, a lot of them tend to put their culture to the side,” he said. “What I want them to do is come here… and really enjoy the culture and the beauty of it.”

Ramirez has spent most of his life in the United States since his parents brought him over from Puerto Rico at the tender age of five. He grew up in Brooklyn and now lives in Poughkeepsie, where he started his business. Ramirez strongly identifies with the Latino community, but that does not alienate him from the rest of society. Gesturing at what he describes as the “vegetable soup” of nationalities at the festival, Ramirez calls them his “extended family”.

“This is all one family here,” he said. “That’s the way I organize my festivals, we’re all family.”