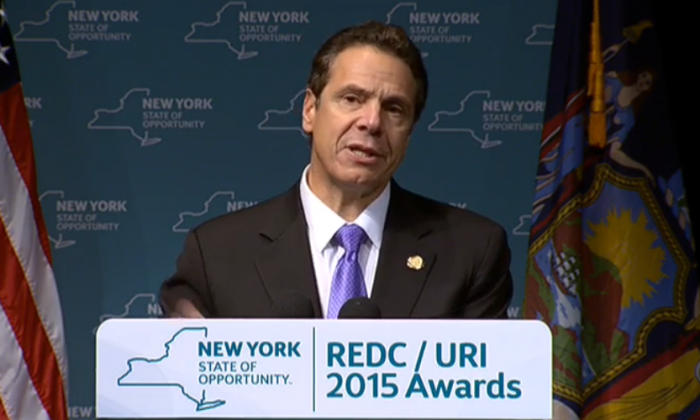 A photo from the video of New York Governor Andrew Cuomo at the announcement of the Regional Economic Development (REDC) and Upstate Revitalization Initiative (URI) awards in Albany on Dec. 10, 2015.
New York

The announcement on Dec. 10 that the Mid-Hudson region received $90.4 million in upstate development awards was bittersweet for the region. It was sweet in that the region got millions to put towards its development goals, but bitter because they were hoping for $500 million instead.

“We are disappointed,” said Maureen Halahan, the CEO and president of the Orange County Partnership and a member of the Mid-Hudson Regional Economic Development Council.

The Mid-Hudson region did not fare as well as we had hoped
— Maureen Halahan, Orange County Partnership
.”

In Middletown, Heritage Restoration Properties LLC got $215,000 to develop the Clemson building on Cottage Street, the city got $500,000 for infrastructure improvements for the community College Campus project at the old Psychiatric Center, and the county received $500,000 to extend the heritage trail from Goshen through Middletown and into Wallkill.

Port Jervis also received a sizable amount. Gillinder Glass Brothers, Inc. received $60,000 to renovate and expand its glass factory, and the city got $50,000 to upgrade its land use and development codes, and another $100,000 to do an engineering study on its waste water system.

$5.5 million will be coming to Orange County for 21 projects.

The county got $1 million to upgrade a wastewater treatment plant off 17M in Goshen in preparation for food company Amy’s Kitchen to move in.

Stewart Airport in New Windsor also got $1 million to expand its space and improve its water, wastewater, and sewage infrastructure.

Warwick Valley Wine Co. received $329,000 to expand its production and have a tour bus that would bring tourists to the Black Dirt Distillery to learn about the history of distilling in New York state.

The Village of Kiryas Joel received $400,000 to improve over 2,000 feet of sidewalks along its Mordche Sher Boulevard, and Zheng Da Construction, LLC got $100,000 to renovate the former equestrian facility New Hope Farms  in Deerpark into a movie production studio.

“These funds are greatly appreciated and will expand the tax base, creating a variety of construction and permanent jobs for Orange County,” Orange County Executive Stephen Neuhaus said in a release.

The other four regions that did not win will receive an additional $50 million, the governor said at the award announcement.

Since the REDC began in 2011, the Mid-Hudson region has received over $300 million for more than 350 projects.

The projects are vetted by the Mid-Hudson Regional Economic Development Council (REDC) then combined as a package and sent to a state committee for review.

The committee decides which regional plans have the most potential to create jobs and spur economic development in a region, and then announce their decisions at the end of the year.

This year they awarded $2.25 billion, the most of any year since it started.

The amount awarded to Orange County alone was updated and the amount it shared with other counties and locations was added on Dec. 11. One of the URI Best Plan regions was corrected on Dec. 14.