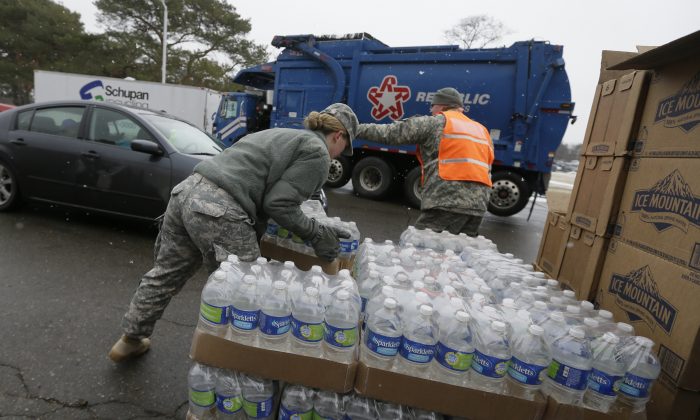 FLINT, Mich.—Michigan offered fresh bottled water for state employees in Flint starting in January 2015, although residents were told that tap water was safe to drink until last fall, a state official said.

Flint residents are now warned to drink only filtered or bottled water because of lead contamination in the city’s supply.

Caleb Buhs, a spokesman for the agency that manages state buildings, said water coolers were introduced at the State Office Building after Flint flunked some drinking water standards that weren’t related to lead.

“We have provided it continuously. That was a decision we made as the building owner” in Flint, said Buhs.

On Friday, Snyder was asked water being provided to state employees in Flint last year.

“I had no knowledge of that taking place,” he said.

Water coolers were introduced after Flint officials warned residents about elevated levels of a disinfection byproduct called trihalomethane in the city’s water.

Notices from the city at the time said drinking water with excessive amounts of trihalomethanes over many years could cause liver, kidney or central nervous system problems and an increased risk of cancer. The notices, however, described Flint’s water as safe to drink.

Flint’s water became contaminated when the city, under emergency state management, switched from the Detroit municipal water system and began drawing from the Flint River in April 2014 to save money.