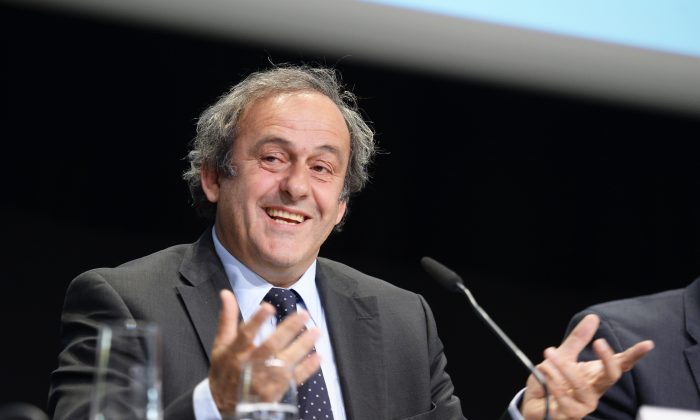 In this May 28, 2015 file picture, UEFA-President Michel Platini speaks during a news conference after a meeting of the European Soccer federation UEFA in Zurich, Switzerland. (Walter Bieri/Keystone via AP)
Soccer

Michel Platini Confirms He Will Run for FIFA President

GENEVA—Michel Platini has launched his campaign to succeed Sepp Blatter as FIFA president, aiming to give the scandal-hit governing body “the dignity and the position it deserves.”

Platini, the UEFA president and a FIFA vice president, wrote to member federations in Europe on Wednesday saying he will stand in the election and is counting on their support.

The FIFA election is on Feb. 26 and would-be candidates must apply by Oct. 26.

FIFA Presidential Election to Be Held on Feb 26

“There are times in life when you have to take your destiny into your own hands,” wrote Platini, who turned 60 last month. “I am at one of those decisive moments, at a juncture in my life and in events that are shaping the future of FIFA.”

Platini has for years been the obvious candidate to succeed Blatter, his mentor in FIFA politics. But a rift between the long-time allies deepened when Blatter broke a promise to leave office in 2015.

The former France great chose last year not to oppose Blatter, who won a fifth presidential term on May 29. Four days later, Blatter announced his resignation plans under pressure from American and Swiss investigations of corruption implicating FIFA.

“However, recent events force the supreme governing body of world football to turn over a new leaf and rethink its governance,” said Platini, who has not been linked to any wrongdoing in the two federal cases.

Still, Platini has been criticized for voting for Qatar as 2022 World Cup host, after seeming to be pressured by then-president of France, Nicolas Sarkozy, ahead of the December 2010 ballot.

In his letter Wednesday, Platini said he wanted a FIFA that is “exemplary … that is respected, liked and of the people.”

Platini chose to run after getting encouragement from some of his fellow FIFA vice presidents last week in St. Petersburg, Russia.

Five of the six confederation leaders, including Platini, were there for the 2018 World Cup qualifying draw with only the North American regional body missing.

Platini then traveled to Philadelphia for the Gold Cup final on Sunday, and briefed CONCACAF leaders on his plans. They included FIFA executive committee colleague Sunil Gulati, the U.S. Soccer Federation president.

The U.S. body was among the five FIFA members which nominated Prince Ali bin al-Hussein to challenge Blatter two months ago. The Jordanian prince was publicly supported by Platini but Blatter had pockets of support across Europe in a 133-73 victory.

Prince Ali, whose FIFA vice presidency expired on May 29, has made public statements this month about FIFA’s election and unclear reform program, but did not confirm his intention to run.

Platini met the prince in the south of France last week and discussed the FIFA election.

Though not the first would-be candidate to launch a formal bid, Platini is the most serious contender in the contest so far.

Another former FIFA vice president, Chung Mong-joon of South Korea, has suggested he will run after stating last week that he doubted Platini was serious about wanting the job. Former Brazil great Zico and Liberia federation president Musa Bility have said they want to seek the five nominations required to be a candidate.

Diego Maradona also said he wants the FIFA job, although the colorful former Argentina great is unlikely to be taken seriously.

The most detailed manifesto by any recent presidential hopeful was issued by Jerome Champagne, the former FIFA international relations director whose exit in 2010 was engineered with Platini’s support.

Champagne criticized UEFA as wealthy and elitist and taking players and resources from other continents, but he did not take part in the last election after failing to get the five nominations required by a January deadline.

Platini signaled in his letter he would champion all of FIFA’s 209 member federations.

“As the president of UEFA, I have brought Europe together on a unifying path,” Platini wrote to the 53 FIFA voters in Europe. “I gave all the national associations — big and small — the place they deserved. Now, I aspire to do the same at world level, to offer all national associations a common cause.”