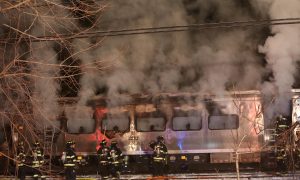 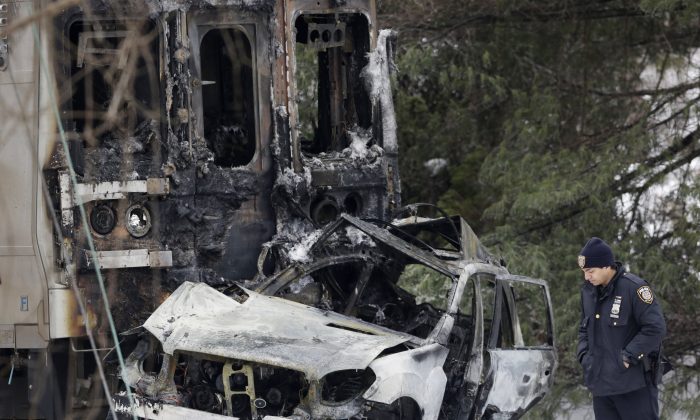 A police officer looks at an SUV that was crushed at the front of a Metro-North Railroad train Wednesday, Feb. 4, 2015, in Valhalla, N.Y. Five train passengers and the SUV’s driver were killed in Tuesday evening’s crash, about 20 miles north of New York City. Authorities said the impact was so forceful the electrified third rail came up and pierced the train. (AP Photo/Mark Lennihan)
New York

The railway crossing in Valhalla, N.Y., where a Metro-North train struck an SUV Tuesday leaving six dead, “has always been worrisome,” to Rob Astorino, executive of Westchester County, where Valhalla is located.

Drivers cross the tracks and make a right or left onto Taconic State Parkway, or continue straight on Commerce Street and “there’s confusion among drivers of who goes where,” Astorino said, noting he’s one of those drivers every morning when going to work. “That is an area that has worried me.”

He wouldn’t go as far as to claim the traffic situation had any bearing on the accident.

The Mercedes-Benz SUV involved in the accident was apparently left on the tracks, but the National Transportation Safety Board (NYSB) wouldn’t speculate on why that was the case without further investigation, NTSB Member Robert Sumwalt said during a Wednesday press conference shared with Astorino.

An explosion occurred after the impact.

The car driver, a woman, died in the accident, as well as five train passengers. Sumwalt noted it is unusual for people inside the train to get killed during such accident.

“We intend to find out what makes this accident different,” he said. “Two big questions: Why was the car on the train tracks? And what caused this accident to be fatal for occupants of the train.”

Last year 769 people died in almost 11,000 railway accidents in the United States, up from 706 casualties the year before, according to the Federal Railway Administration.