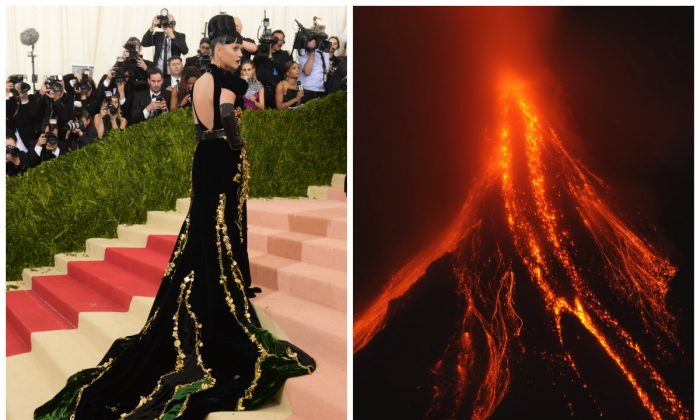 Met Gala: Katy Perry, Zayn Malik, Gigi Hadid, Taylor Swift and What We Were Reminded Of

Met Gala 2016 is over—let the fashion scrutiny begin. This year’s theme of “Manus x Machina: Fashion in an Age of Technology” was supposed to explore the relationship between the human hand and the machine in creating fashion. Well, let’s see how designers and guests interpreted the message.

Katy Perry arrived in black Prada with gold embellishments and a long train. She explained a Tamagotchi digital pet on her belt as her “tech contribution.”


We can’t shake off the impression of a volcano erupting at night.

Gigi Hadid was accompanied by Zayn Malik, who completed his suit with silver metal arms.


Knight in a shining armor? But this is a technology night, right. Then perhaps…

Talk to the hand! #IronMan pic.twitter.com/MYcVwYI7RO

Taylor Swift, a co-host of the gala, had black sandals with a silver, sparkly Louis Vuitton dress.


And, we have to say, this is one supersonic dress about to take off.

Kim Kardashian wore a silver Balmain gown. She told E! that she was going for a “blingy” robot look.


We’re not sure if she aimed specifically for an impression of Maria, the female robot of the 1927 movie “Metropolis.” But if she did, it may have also been a pun on the Metropolitan Museum of Art.

We’re not sure if Gomez is dressed for a Hampton’s party or for the next Tomb Raider audition. We don’t really have a comment about the dress, so let’s just, for a moment, look more closely at her shoes. She is in New York, after all.

The annual gala is a fundraiser for the Metropolitan Museum of Art’s Costume Institute.