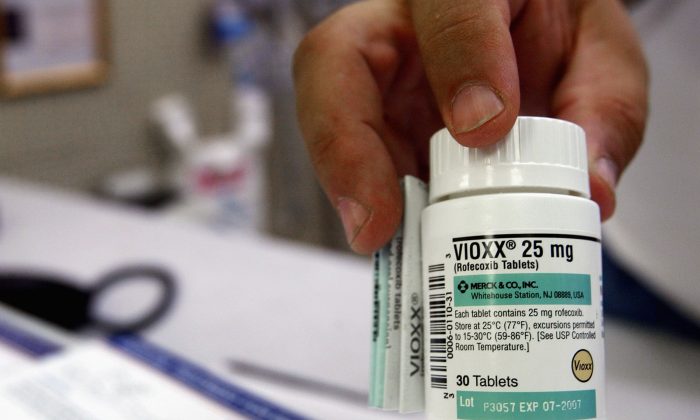 Merck Returns to Court Over Charges of Bone Harm

It has been a decade since Merck’s “super-aspirin” Vioxx was withdrawn from the market after a study showed it doubled the risk of heart attacks and strokes. Now Merck is returning to court against its will to face charges that Vioxx also caused devastating non-healing of spine and bone after surgical procedures, a charge supported by scientific studies.

The suit is brought by Dennis Harrison, who now lives in Michigan and is one of few plaintiffs remaining from the 70,000-case multidistrict litigation (MDL) that led to Merck’s 2007 settlement.

Unlike patients prescribed Vioxx for its FDA-approved uses of osteoarthritis, menstrual pain, and acute pain, Harrison was prescribed Vioxx for the unapproved use of rheumatoid arthritis (RA). In 2011, Merck settled charges that it “misbranded” Vioxx by promoting it for RA, illegal marketing that made RA the fifth most common reason for Vioxx use.

Because Vioxx was not approved for RA use, and Merck is not shielded by FDA approval, Harrison’s suit claims outright fraud.

Jim Duggan, who has been providing free legal support to Harrison, said in a phone interview that the company’s prescribing Vioxx for RA was “no different than if Merck sold the drug on a street corner.”

A summary judgment filed by Merck (a legal move that says the case is without merit and does not need to be tried) was denied in May, and Merck must go to court in New York later this year.

Harrison, 61, a former product planner and business strategist with ATT/Lucent Technologies, sustained permanent spinal damage from years of high doses of Vioxx, according to court filings, when his body failed to form bone after a 2001 spinal-fusion operation. He spent months in a nursing home unable to walk, endured sepsis and other life-threatening conditions, and is largely bed-ridden to this day.

Nearly all of his doctors attended Merck-funded seminars to build confidence in Vioxx, Harrison said, and were not told about its serious bone effects. “Merck knew and the doctors and public didn’t,” Harrison said.

Vioxx reduces pain by inhibiting COX-2, an enzyme responsible for inflammation and pain. The problem is, inflammation, notably the actions of prostaglandin, is also necessary for bone repair.

Scientific journals, practicing surgeons, and physicians have observed how the inhibition of COX 2 delays and impairs bone healing. Over-the-counter painkillers like Motrin and Aleve (called nonsteroidal anti-inflammatory drugs or NSAIDs) also suppress COX-2, but most of their action suppresses the body’s COX-1, which is not involved in bone healing.

Merck knew about the negative bone effects and hoped to avoid admitting them to the FDA, doctors, and patients. As early as 1997, Merck memos reflect concern that blocking COX-2 altered bone metabolism, and in 1998, memos show that the FDA had similar concerns. Handwritten notes between Merck scientists asked whether non-healing bone in animal studies had “implications” for people.

A year before Vioxx was withdrawn, Merck executives wrote to each other that they were not interested in additional animal studies and that they therefore needed to “provide the rationale [to the FDA] for our lack of interest in the animal model.” Like all drug companies, Merck conducts animal studies to “prove” a drug safety.

After Merck received an FDA warning letter in 2001 for its illegal marketing of Vioxx for rheumatoid arthritis, Merck sought to get Vioxx approved for RA. It submitted a study that actually showed 40 percent of RA patients had impaired bone healing on Vioxx.

Chastened by the FDA, Merck proceeded to resubmit a study, lowering the Vioxx dose from 50 milligrams to 12.5, which no longer revealed the bone effects, according to Harrison’s legal team, who are all volunteers.

Before it was banned, Vioxx was also heavily advertised by celebrity athletes like Dorothy Hamill and Bruce Jenner and used by approximately 20 million patients. Estimates of the number of heart attacks caused by Vioxx range from 27,000 to up to 140,000. In 2010, Merck compensated 20,591 heart-attack and 12,447 stroke plaintiffs out of a $4.85 billion settlement fund.

Martha Rosenberg is author of the award-cited food expose “Born with a Junk Food Deficiency,” distributed by Random House. A nationally known muckraker, she has lectured at the university and medical school level and appeared on radio and television.