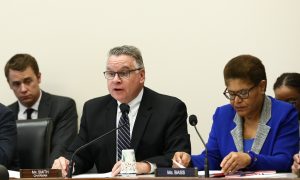 The FBI left the Foreign Intelligence Surveillance Court, which approved the application, in the dark about the fact that the information was paid for by the Clinton campaign and the Democratic National Committee (DNC).

The source of the information, identified as Source #1 in the documents, was former British spy Christopher Steele.

According to an investigation by the House intelligence committee, Steele had been paid an estimated $160,000 by the Clinton campaign and the DNC through law firm Perkins Coie and opposition research firm Fusion GPS.

The information became publicly known as the “Steele dossier” and consists of a series of uncorroborated and salacious claims mostly from Kremlin-linked sources.

Nevertheless, the FBI was able to secure a spy warrant based on the Steele dossier, which was commissioned in April 2016.

The same dossier was also a driving force behind the media narrative that then-candidate Donald Trump colluded with Russia to win the 2016 election.

In the documents, which are part of a defamation suit against Steele, his counsel writes that he was directed by Fusion GPS to provide briefings to media organizations on multiple occasions. Among the media mentioned specifically are CNN, The New York Times, The Washington Post, The New Yorker, Yahoo News, and Mother Jones.

While most media were initially reluctant to report on the claims, given the fact that they couldn’t be verified, Yahoo News chief investigative correspondent Michael Isikoff reported on it in September 2016.

Isikoff’s report was in turn used by the FBI as additional evidence in its FISA application to spy on Page, without disclosing that it was the same information from the same source.

CNN eventually found a way to report on the dossier in early January 2017, when it was provided information by then-director of national intelligence James Clapper.

The investigation of the House intelligence committee revealed that Clapper had lied to Congress about his contact with CNN.

It states that after first denying having made contact, Clapper admitted that he spoke with CNN’s Jake Tapper a day before the network ran a controversial article saying that President Barack Obama and then-president-elect Trump had been briefed on the contents of the dossier.

The leaked information of the briefing provided the news hook that CNN—and, by extension, other news organizations—needed to report on the unverified information contained in the Steele dossier they had sat on for months.

Buzzfeed News went as far as publishing the entire dossier online, which in turn allowed the public to see the shoddiness of the claims.

Nevertheless, wild accusations such as the so-called “Trump pee tape” contained in the dossier have now been widely spread.

As recent as this month, well over a year into Trump’s presidency, reporters again brought up the unsubstantiated claims during a high-profile press conference with Russian President Vladimir Putin in Helsinki. An Associated Press reporter asked Putin, “Does the Russian government have any compromising material on President Trump or his family?”

Besides the FBI and the media, the same disinformation was also spread among politicians.

Sen. John McCain (R-Ariz.) acknowledged in a statement last year that he had obtained a copy of the Steele dossier, through an associate of his, David Kramer, after which he gave it to then-FBI Director James Comey.

Information contained in the dossier was also provided by then-CIA Director John Brennan to the so-called “gang of eight” in Congress. Following the briefing from Brennan, then-Senate Minority Leader Harry Reid wrote a public letter to Comey accusing Trump of colluding with the Russian government and calling on Comey to investigate this and make the investigation public. Media then reported on Reid’s accusations.

To this day, most of what we hear from politicians and media organizations when it comes to the alleged collusion between Trump and the Russian government can be traced back to the same source—the unverified Steele dossier.

Given the fact that media themselves were part of the cycle that laundered and promoted the information contained in the dossier—intentionally or unintentionally—it has become very difficult for them to step back and report accurately on the findings that came out in the recently declassified FISA warrant.