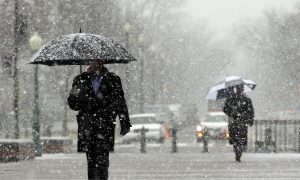 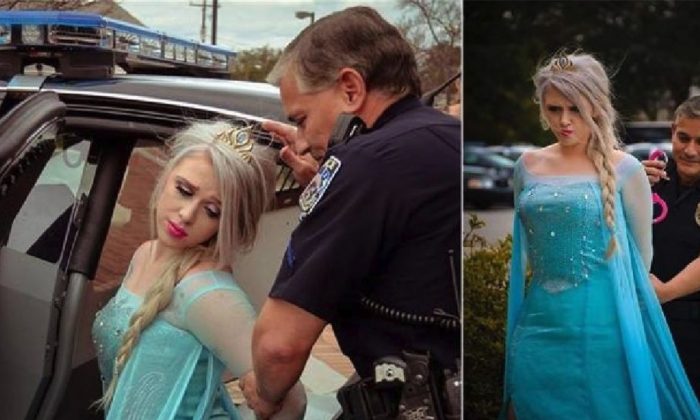 An Illinois police department has taken an unconventional step in its battle with the polar vortex—by announcing that a Disney film character had been placed under arrest.

The McLean Police Department said on Jan. 29 that officers had placed Elsa—the Queen of Arendelle from the Disney movie “Frozen”—under arrest for allegations of sending a brutal spate of brutally cold temperatures to the Midwest.

The Facebook account of the McLean Police Department shared images of the apparent arrest, writing: “Due to the EXTREME COLD weather, all criminal activity and acts of stupidity and foolishness has been cancelled. Even Elsa has been placed under arrest with NO BOND until further notice.”

In one of the images, a visibly annoyed Elsa appeared to be pouting, while the arresting officer held up a pair of pink handcuffs.

ATTENTION: Due to the EXTREME COLD weather, all criminal activity and acts of stupidity and foolishness has been…

The account punctuated the post with a polite sign-off, thanking the public for their “attention and understanding to this matter.”

The post drew a flurry of remarks, including from one commenter, who pointed out that the photographs posted by the account appeared to be the same as those taken years earlier by another police department and now recycled.

“Considering those pictures were taken in South Carolina 4 years ago…Jeeze, even the police are stealing credit for someone else’s work,” commented Jillian Byrd.

Huffington Post featured the entire set of Elsa arrest photos when the news outlet reported on a tongue-in-cheek police-involved photo shoot back in 2015.

The photographs of Elsa’s arrest were attributed to Tammy Sakalas, of Sakalas Photography, and Glass Slipper Productions, “an events company in Hanahan that arranges for princesses to visit birthday parties and children’s hospitals.”

“Jillian Byrd I’m so glad you pointed that out! Those were taken here in Charleston by the Hanahan Police Department,” replied another commenter, while someone else still wrote: “Funny is funny. Someone always has to be the accuracy ‘police’ 😉”

But while the McLean Police Department chose to have fun with some polar vortex make-believe, the real-world impact of the bitter cold snap is no joke.

The polar vortex cold snap affecting primarily the Midwest and the northern United States has already been blamed for at least six deaths.

A 55-year-old Milwaukee man was found frozen to death in a detached garage near a snow shovel.

Officials said that the body of Charley Lampley had likely been outside overnight and noted that the garage door was open.

The Milwaukee County Medical Examiner’s Office said that Lampley collapsed after shoveling snow and died, reported Fox 6. The death was ruled “natural” and nothing in the case was suspicious, the office added.

Jamie Harwood, the Peoria County coroner, told the Peoria Journal Star that the man was found outside his house mid-afternoon after an apparent fall.

In Libertyville, Illinois, a 75-year-old man who was clearing snow was struck and killed by a village snowplow on Monday around 10 a.m., the Libertyville Fire Department said, according to reports.

The pedestrian who was struck and killed by a snow plow Monday in Libertyville has been identified as a 75-year-old resident, the Lake County Coroner's office announced. https://t.co/vpJlwMdQ3q

A couple in Indiana was killed when the vehicle they were driving spun sideways after hitting ice and was hit by an SUV traveling in the opposite direction.

It happened Monday on a rural Noble County road. https://t.co/YdyBIEfYCu

The deaths came as temperatures in the Midwest fell to as low as -75 degrees Fahrenheit and prompted authorities to warn people to stay indoors until Thursday if possible.

People can get frostbite on exposed skin in just minutes due to the dangerously cold wind chills and were advised to cover all skin surfaces if they decide to go outside.

“A Wind Chill Warning means the combination of very cold air and the wind will create dangerously low wind chill values. Frostbite can occur quickly and even hypothermia or death if precautions are not taken,” the National Weather Service stated in one alert.

The Midwest will be the worst hit, and Chicago is forecast to see a high of -12 degrees and a low of around -22 degrees Fahrenheit on Wednesday. Other cities like Milwaukee, Detroit, Minneapolis (which could see a low of -30), and Des Moines will endure similar, frigid conditions.