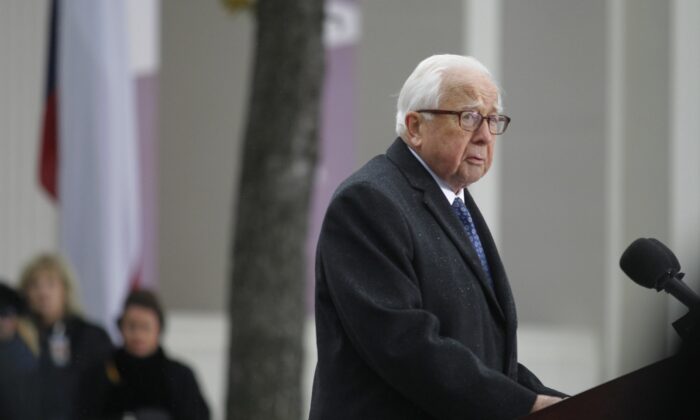 Historian David McCullough is the keynote speaker at “The 50th: Honoring the Memory of President John F. Kennedy”; event in Dallas on the 50th anniversary of the president’s assassination, on Nov. 22, 2013. (Rodger Mallison/Fort Worth Star-Telegram/MCT via TCN)
Viewpoints

I hated college history. The textbooks were mostly about dead white men, Abigail Adams excepted. The lectures were boring. I didn’t see how any of it related to my young life and future plans.

Historian David McCullough, who died this week at age 89, helped change my attitude toward history and its contemporary relevance. At a time when some are trying to tear history down by re-naming highways and removing statues of slave owners, McCullough built history up.

He was fond of saying of those he wrote about: “If they’re not forgotten, they’re not gone.”

Whether it was his book “1776,” described by Amazon this way, “(It) tells the intensely human story of those who marched with General George Washington in the year of the Declaration of Independence, when the whole American cause was riding on their success, without which all hope for independence would have been dashed and the noble ideals of the Declaration would have amounted to little more than words on paper,” or “Truman,” which provides “a deeply moving look at an extraordinary, singular American,” or “John Adams,” which was made into a film series on HBO, or my personal favorite, “The Wright Brothers,” an American story if ever there was one about two brothers who owned a bicycle shop, built and were the first to successfully fly an airplane. They had no help from the U.S. government and received financing from France until Washington saw it work and then belatedly came aboard. Some things never change.

McCullough didn’t just recall history. In a sense he revived history and our interest in it.

President George H.W. Bush invited historians to the White House for a series of talks on American presidents. I attended one at which McCullough spoke. His subject was Andrew Jackson. McCullough described the “open house” following Jackson’s Inauguration on March 4, 1829 at which 20,000 people attended. The event became so rowdy, Jackson climbed out a window to escape the mob.

McCullough had the audience laughing as if he were a comedian. In his books, he draws in the reader as if to say, “this is important to you and to your country. Learn from it.” His excellent research and writing style make us feel we are there witnessing the events he describes, not like some other historians who make one feel they are “looking through a glass darkly.”

Other historians, including Stephen Ambrose, Doris Kearns Goodwin, and Douglas Brinkley (among several moderns who also deserve credit for re-writing history in a readable and compelling way) share in the credit for making history relevant again, but for me McCullough, a two-time Pulitzer Prize winner, is the tops.

As George Santayana famously said, “Those who do not learn history are doomed to repeat it.” Times change, but human nature never changes. David McCullough has shown why the lessons of history remain important, especially for those determined not to repeat history’s mistakes and to learn from its successes.

Fortunately, his works are so good they will be read—and should be—by generations yet to come.