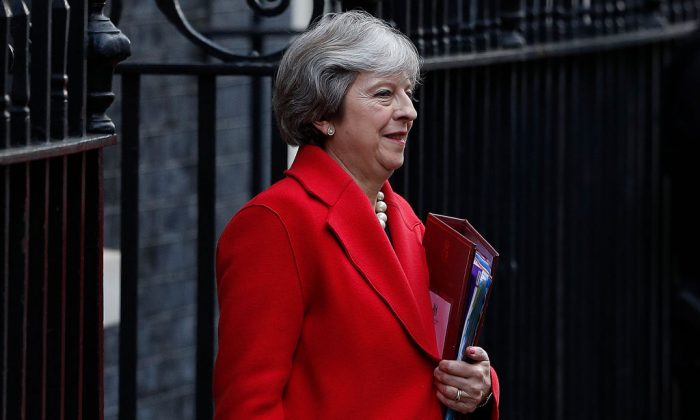 May Heads for Brussels as Last-Minute Brexit Talks Go On

BRUSSELS/DUBLIN—British negotiators were locked in last-minute talks with their European Union and Irish counterparts on Monday Dec. 4, trying to put together a Brexit deal that Prime Minister Theresa May might agree over lunch in Brussels.

London has broadly agreed to many of the EU’s divorce terms, including paying out something like 50 billion euros. But the issues of the rights of expatriate citizens and the UK-EU border on the island of Ireland remain fraught, diplomats said.

Brussels officials and diplomats sounded increasingly confident of a deal over the weekend, but they caution that much will depend on the outcome of May’s talks over lunch.

“I have a good feeling but I am not prejudging the outcome,” one senior Brussels diplomat said.

May hopes that her talks with European Commission President Jean-Claude Juncker and his Brexit negotiator, Michel Barnier, due to start at 1:15 p.m. (12:15 GMT), can persuade her 27 fellow EU leaders that “sufficient progress” has been made on divorce terms for them to agree next week to open talks on their future trade relationship.

They will hold a summit on Friday, Dec. 15, chaired by European Council President Donald Tusk, with whom May has scheduled a meeting at 4 p.m., after her lunch with Juncker.

Dublin, backed by the rest of the EU, is seeking strong assurances that London will commit to keeping business regulations in Northern Ireland the same as in the EU, to avoid a “hard border” that could disrupt peace on the island.

Coveney said the talks are in a “sensitive place”, with the British and Irish governments discussing possible texts of an agreement. Britain is seeking to keep its options open, having rejected a commitment to leave Northern Ireland in a customs union with the EU or to keep the whole United Kingdom in one.

May depends in parliament on a pro-British party in Northern Ireland that rejects any deal which would divide the province from the British mainland. But Ireland and the EU say maintaining a customs union is the best way to avoid “regulatory divergence”.

Juncker and Barnier will meet the European Parliament’s Brexit team at 11 a.m. to brief them on progress. The legislature, which must approve any withdrawal treaty if a disruptive Brexit is to be avoided in March 2019, has demanded that EU courts have the final say in guaranteeing rights for 3 million EU citizens in Britain. Britain insists that it will no longer accept the supervision of the European Court of Justice.

Nadine Dorries, a member of Britain’s ruling Conservative Party who supports Brexit, said May should tell EU officials time is running out to move talks on to the next phase.

The EU has had “enough time now to decide whether or not they are going to discuss trade with us, they need to get on with it and if they don’t get on with it, the closer we get to walking away with no deal”, she said.

May portrays Monday’s meeting as part of preparations for an EU summit on Dec. 15 – though the EU says no negotiations will be conducted at the summit itself, so Monday is the last chance for her to make offers. A British spokesman said: “With plenty of discussions still to go, Monday will be an important staging post on the road to the crucial December Council.”

Since Britain’s referendum on leaving the EU in 2016, high-profile opponents of Brexit have suggested Britain could change its mind and avoid what they say will be a disaster for its economy. Half of Britons support a second vote on whether to leave the EU, according to an opinion poll published on Sunday.

With the clock ticking down to the March 2019 exit date, May is under pressure to start talks on its future trade ties by the end of the year to remove the cloud of uncertainty for companies that do business in the EU.

More than 30 pro-Brexit supporters, including members of parliament and former Conservative ministers, have signed a letter calling on May to walk away from talks unless key conditions are met.

They include an end to free movement of people from the EU into Britain and for the European Court of Justice to have no further role in British legal matters after March 2019.