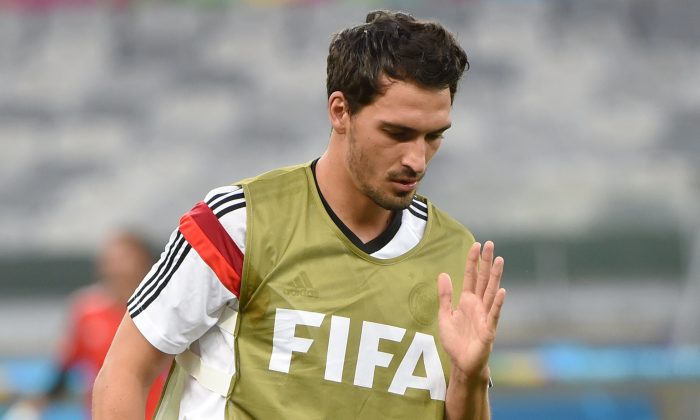 Germany's defender Mats Hummels warms up during a training session at The Mineirao Stadium in Belo Horizonte on July 7, 2014 on the eve of their 2014 FIFA World Cup semi-final against Brazil. (PATRIK STOLLARZ/AFP/Getty Images)
Sports

Barcelona could be stepping in to ensure that Mats Hummels doesn’t go to Manchester United.

The 25-year-old German international has been the subject of some transfer speculation recently, which is not surprising given his outstanding World Cup 2014 performance.

The Borussia Dortmund man scored 2 goals and aided Germany to 3 clean sheets so far in the global showpiece.

According to Metro, new Man United boss Louis van Gaal has approved a final £20 million bid for Hummels. The Red Devils have been pursuing Hummels for a while without any success.

However, La Liga side Barcelona are prepared to up Man United’s offer, according to Spanish newspaper Mundo Deportivo.

Hummels had earlier said that he wishes to play in England some day, but definitely not this coming season.