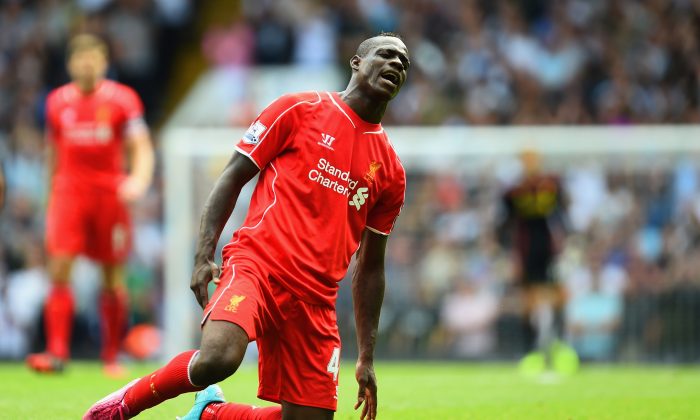 Mario Balotelli might be involved in another piece of controversy again.

In a closed door friendly game against Wolverhampton Wanders on Friday, September 5, the Italy international was replaced after speaking to referee Chris Foy after a 50-50 challenge with Wolves midfielder George Saville.

Although social media report that Balotelli kicked Saville, ESPN FC was told by sources from Liverpool and Wolverhampton that this information is false.

There were some concerns raised that Balotelli would generate too much controversy and spoil the team spirit, but Reds boss Brendan Rodgers has said that he will not allow 24-year-old to get carried away with his antics.

“This is not the Mario Balotelli show,” Rodgers said on August 29.

“He has a lot of work to do and the star of the team will always be the team.

“He is going to be treated the same as every player here, that’s for sure,” Rodgers added.

FLORENCE, Italy—Italy coach Antonio Conte was not trying to send a message to Mario Balotelli by leaving him off his first squad.

Balotelli, who recently joined Liverpool from AC Milan, was not included in the 27-man squad for Italy’s first qualifying match for the 2016 European Championship against Norway on Sept. 9. Italy also plays the Netherlands in a friendly on Thursday.

“We have been monitoring every match. The call-ups are based on those we observed, with those we had footballing evidence on,” Conte said. “I don’t have to send a message to anyone. Those who know me know very well how I operate, how I am, I do not present gifts to anyone.

“I also told the lads that today there is this group and that as long as they deserve to be in the national squad, to wear the Azzurri shirt they will remain, but that doesn’t mean that who’s there today will be there tomorrow and vice versa. What is important is that those who are in the national team have to know how to behave and how to stay in the team.”

Balotelli is suspended from the qualifier after picking up two yellow cards at the World Cup. Juventus midfielder Claudio Marchisio is also suspended, but has been included.

The 24-year-old Balotelli had a disappointing World Cup as the Azzurri went out in the group stage, prompting Cesare Prandelli’s immediate resignation.

Ciro Immobile was the only striker selected who went to Brazil. Uncapped Sassuolo striker Simone Zaza is also among the six forwards named by Conte.

“I called up forwards who have certain characteristics, who fit into my style of playing,” Conte said. “At the World Cup Italy played with just one main striker, whereas my teams play with two.

“They say I have not called up regulars, with the exception of Zaza. But if we look at the teams, the regulars are foreigners.”

Conte acknowledged that the number of foreigner players in Italy was having a detrimental effect on the national team.

“I happened to catch some live games and unfortunately certain clubs did not have an Italian on the pitch, or just one or two,” Conte said. “This certainly does not make my task easier.

“It is right to make reflections, there also needs to be major reforms to provide more space to Italian players, to make sure that the national team is the driving force for Italian football.”

Juventus defender Angelo Ogbonna was called up by his former club coach on Monday night after Parma’s Gabriel Paletta was ruled out by lumbago and sent home.