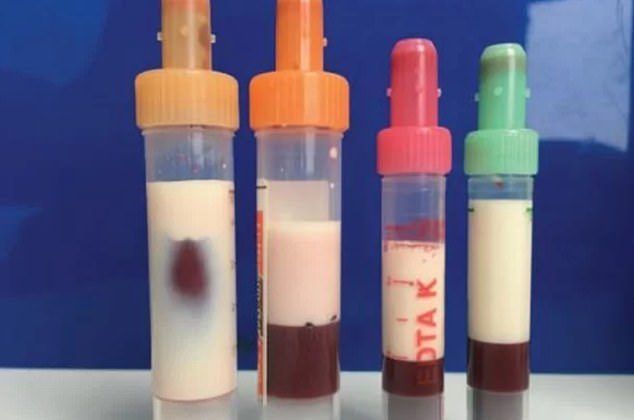 Samples of the man's blood about two hours after they were drawn, with the white colored substance being the fat. (Annals of Internal Medicine/American College of Physicians)
Health News

A man’s blood turned milky white after a dangerous amount of fat built up in his arteries and veins.

The 39-year-old man from Germany—who was not named in the case report published in the Annals of Internal Medicine—went to the emergency room with a range of symptoms.

He complained of nausea, vomiting, headache, and reduced alertness.

The man quickly lost consciousness, according to a report by LiveScience, and doctors at the University Hospital of Cologne fitted him with a breathing tube to keep him alive.

Why Did the Blood Turn ‘Milky’?

Tests later revealed the level of fat—or tryglicerides—in the man’s blood was an astonishing 14,000 milligrams per deciliter (mg/dL).

Doctors diagnosed him with hypertriglyceridemia—a condition of abnormally high levels of fat in the blood.

With the man’s fat levels 28 times higher than acceptable and his condition deteriorating quickly, doctors tried to remove the excess fat from his blood with a technique known as plasmapheresis—that uses a machine.

His blood had so much fat, however, that the machine became clogged.

Why Did Doctors Use ‘Bloodletting’?

Bloodletting is a practice dating back thousands of years that involves withdrawing blood from the body—historically using cuts or leeches—in the belief that this may help treat certain ailments. Over time the practice of bloodletting has been increasingly dismissed or classified as pseudoscience.

When the machine doctors initially used to remove the fat from the man’s blood became inoperable because of clogging, they instead resorted to manually draining the man’s blood in what’s also known as “letting blood.”

The doctors drained some of the patient’s blood and replaced it with a fresh supply of concentrated red blood cells and frozen plasma along with a physiologic saline solution.

The levels of fat in the man’s blood dropped and doctors eventually managed to switch back to the machine to continue with standard treatment protocols.

‘I Applaud the Doctors’

“If plasmapheresis cannot be done due to extreme hyperviscosity, our experience demonstrates that conventional bloodletting with replacement (fluids) may be an effective alternative. To our knowledge, this is the first report to describe this procedure,” the researchers said in a case note.

Cardiologist Guy Mintz, who was not involved in the case, said the medical staff’s response to initial treatment failure, as described in the case report, was an “innovative treatment adaptation” under conditions where someone’s life was in danger. “I applaud the doctors for thinking out of the box,” he told LiveScience.

The man has reportedly made a full recovery, with doctors blaming his obese frame, poor diet, and uncontrolled diabetes for the life-threatening incident.

According to WebMD, there are several steps people with hypertriglyceridemia can take to reduce the level of fat in their blood. This includes losing extra weight, not smoking, limiting alcohol, cutting back on sugar, and exercising every day.