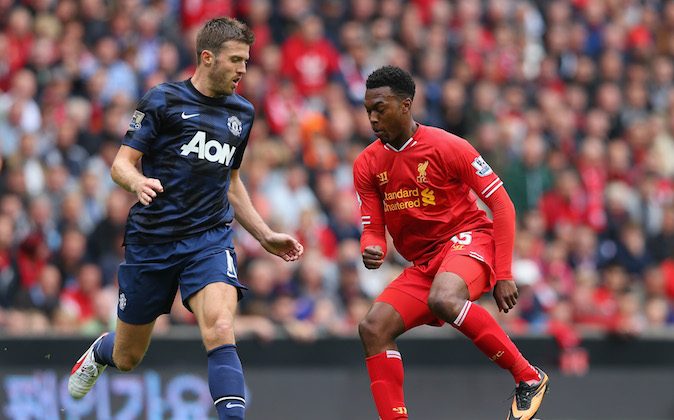 The game will be broadcast on Sky Sports 3D and Sky Sports 1/HD in the United Kingdom.

The game will also air on NBCSN and Telemundo in the United States.

Live stream is available on MUTV Online and LFC TV Online for subscribers, as well as NBC Sports Live Extra.

Manchester United have won 2, drawn 2, and loss 1 of the last five matches (WLWDD).

Liverpool have won 4 and lost 1 of their last five matches (WWLWW).

Below is an AP article of the match.

Liverpool has not finished above Manchester United in the Premier League for 12 years, but the Reds’ agony looks about to end. For once, Brendan Rodgers’ players are travelling to their bitter rivals as favorites, having played a superb attacking football the whole season.

The Reds are 11 points ahead of United in the standings and have scored 73 goals in the league this season, 27 more than David Moyes’ team and more than any other club. United has shown signs of improvement recently but a first loss at Old Trafford against Liverpool since a 4-1 drubbing five years ago would not be a surprise.

“To see Man City doing well, and particularly Liverpool, is really difficult,” United striker Wayne Rooney told Inside United magazine. “It’s not nice when we know we are capable of being up there challenging and we haven’t been doing that this season. However, it means we have to step up and get back up there because the feeling we’ve had this season is not a nice feeling at all to have.”