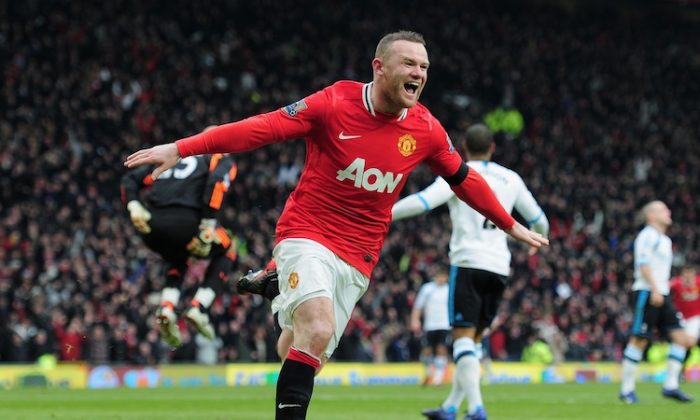 Manchester United’s Wayne Rooney was the difference-maker as the Red Devils gained a measure of revenge over Liverpool. (Shaun Botterill/Getty Images)
Soccer

Manchester United Too Good for Liverpool in Testy Affair

Manchester United avenged their exit from the FA Cup at the hands of Liverpool two weeks ago with a 2–1 win over the Merseyside club at Old Trafford in Saturday’s early English Premier League fixture. Former Everton star Wayne Rooney was the hero with both goals in a victory that took his team back to the top of the Barclays Premier League, at least until Manchester City play on Sunday.

The main talking point prior to kick-off was the first meeting of Luis Suarez and Patrice Evra since the racism row that resulted in an eight-match ban for the Uruguayan international. Regrettably, Suarez fuelled the acrimony between the teams by refusing to accept Evra’s hand during the customary pre-match handshakes.

Liverpool left back Jose Enrique returned after missing Monday’s draw against Tottenham Hotspur with a stiff back. Andy Carroll and Charlie Adam both started on the bench while United nemesis Dirk Kuyt was given a start. The Dutchman scored the winner at Anfield in the Cup clash and netted a hat-trick when the two sides met in the League last March.

The game was only two minutes old when Evra charged towards Suarez, but succeeded only in colliding with Rio Ferdinand who was also attempting to tackle the Liverpool striker. The United No. 5 landed awkwardly, jarring his neck, and was obliged to temporarily leave the field for treatment.

Liverpool appeared very lackluster and with Paul Scholes, Ryan Giggs, and Michael Carrick bossing the midfield, the visitors’ most dangerous player was probably Glen Johnson. Indeed, it was the England right-back who had the best sight of goal for Liverpool in the early part of the match, but fired his shot wide.

That turned out to be Liverpool’s only significant chance in a half that United dominated. Antonio Valencia and Rafael combined well down the right hand side and gave Enrique a torrid time on his return to the starting line-up.

However, the home side’s best chance of the half came on 31 minutes when Scholes played the ball out to Giggs on the left, then continued his run into the six-yard box to be in the perfect position to receive the Welshman’s pinpoint cross. The veteran made good contact on his header, but it was virtually straight at Pepe Reina who made a reaction save. A yard either side, and the keeper would have stood no chance.

Having dominated most of the first 45 minutes United should have had something to show for their efforts on the scoreboard, but they had lacked the killer punch in front of goal and so it was still all square at the break.

Fracas in the Tunnel

As the players left the field, the simmering bitterness erupted and it was reported that scuffles ensued which required the intervention of stewards and police. It was a full five minutes before the two teams made it to their respective dressing rooms.

When the players returned to the field and battle recommenced it was United that had the passion and desire to break the deadlock. On 47 minutes, the Liverpool defense failed to deal with a Giggs corner, which found Rooney in space at the far end of the six-yard box. United’s main man lashed the ball home for his 20th goal of the season in his 350th appearance for the club.

Barely three minutes later, Jay Spearing gave up the ball when pressed by a determined Valencia. The Ecuador international, who has been a revelation in recent weeks, slid the ball to that man Rooney who drilled it between the hapless Reina’s legs for United’s second.

On the hour, Kenny Dalglish brought on Andy Carroll and Craig Bellamy for Spearing and Stuart Downing. Then Kuyt was withdrawn in favor of Charlie Adam in an effort to improve supply to Liverpool’s front men.

The visitors had really created very little all afternoon, and a set piece was always likely to be their best chance of pulling a goal back , particularly with Carroll now available to try and unsettle David De Gea at close quarters as he had successfully done two weeks earlier.

Ten minutes from time the opportunity arose with a free kick awarded to Liverpool around 30 yards out. Adam pumped the ball into the box where it bounced off Rio Ferdinand’s thigh into the path of Suarez who gratefully gobbled up the scraps.

In fact they could have grabbed an unlikely, and frankly, undeserved equalizer in the final minute of normal time but De Gea earned his money for the second week in a row when he athletically tipped a Glen Johnson pile-driver over the bar to ensure that United held on to all three points and moved into top spot.

For Liverpool, it was another setback in their fight for that tightly contested fourth Champions League qualification place.