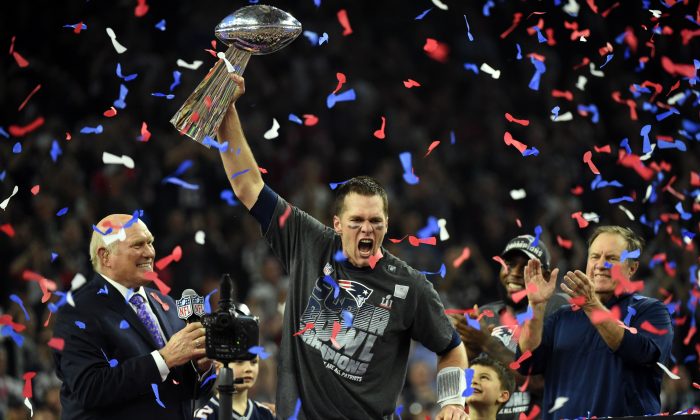 Tom Brady #12 of the New England Patriots holds the Vince Lombardi Trophy as Head coach Bill Belichick (R) looks on after defeating the Atlanta Falcons 34-28 in overtime during Super Bowl 51 at NRG Stadium in Houston, Texas on Feb. 5, 2017. (TIMOTHY A. CLARY/AFP/Getty Images)
NFL

ALBANY, N.Y.—The 51st Super Bowl will be remembered for the New England Patriots pulling off the game’s biggest comeback ever for their fifth NFL title. A New York woman will remember it as the night she got engaged at halftime.

Chris Garguilo & Kourtney Myers are engaged! You all saw his proposal on air. See the story and reaction tonight on @FOX23News pic.twitter.com/H5zg4VSDuB

The ad aired locally just before the halftime show as the couple watched with friends at home. Garguilo repeated the question in person, she said yes and he placed the engagement ring on her finger as their friends whooped for joy.

The couple is hoping to get married next year.