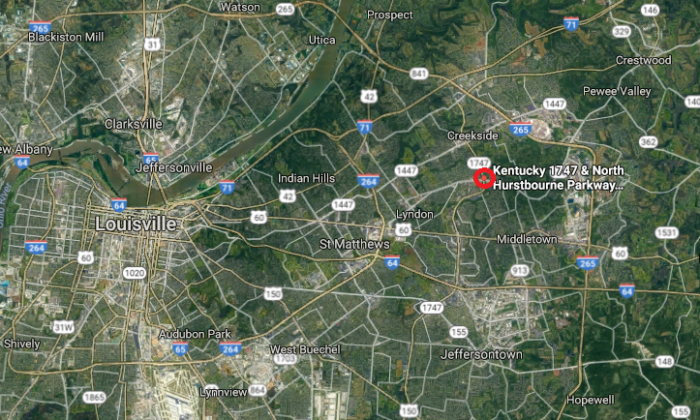 The approximate location where Brandon Hurley pulled over an off-duty police officer on Oct. 28, 2017, in Louisville, Ky. (Screenshot via Google Maps; marked by The Epoch Times)
Crime and Incidents

Man Pretends to Be Policeman, Pulls Over Real Officer

A Kentucky man was arrested and accused of impersonating a police officer after he pulled over a driver who happened to be an off-duty policeman.

Brandon Hurley, 24, was driving down Hurstbourne Parkway near New La Grange Road in Louisville on Saturday, Oct. 28, when he turned on flashing lights and honked his horn, making the car in front of him pull over.

Apparently acting as a police officer, Hurley got out of his car, approached the other vehicle, and accused the driver of hitting a curb, WLKY reported. He also asked the driver if he knew how fast he was going.

Hurley told the officer he was not going to issue him a ticket.

The man asked Hurley which department he worked for. Hurley said Jefferson County, but that he didn’t have his badge. He then informed Hurley he was a Louisville Metro Police Department officer, except he was off-duty and in his personal car.

The officer asked Hurley for his badge number. But Hurley got back into his car and drove away in the wrong way of traffic.

The officer managed to write down Hurley’s license plate number.

ICYMI: Police said a man in Kentucky was pretending to be a police officer when he pulled over an actual officer https://t.co/TGXu8krKeo

“Officer believed he recognized defendant from high school, which is another bad break,” Delahanty said.

Hurley was charged with impersonating an officer and second-degree wanton endangerment, for creating a substantial danger of injury to another person.

The judge told Hurley to turn the flashing lights from his car over to the court, and let Hurley go until Nov. 21, when Hurley is due to appear in court.

A similar incident happened three years ago just 10 miles north of Louisville in Sellersburg, Indiana per WLKY. John Brock, 42, pulled up next to an unmarked police car on a red light, gestured at the off-duty officer to pull down his window, and then spewed profanities at the officer while flashing a real-looking badge.

Both cars moved on upon green light, but the officer followed Brock to a store and called for backup. Brock was arrested for drunk driving with suspended license and for impersonating an officer.