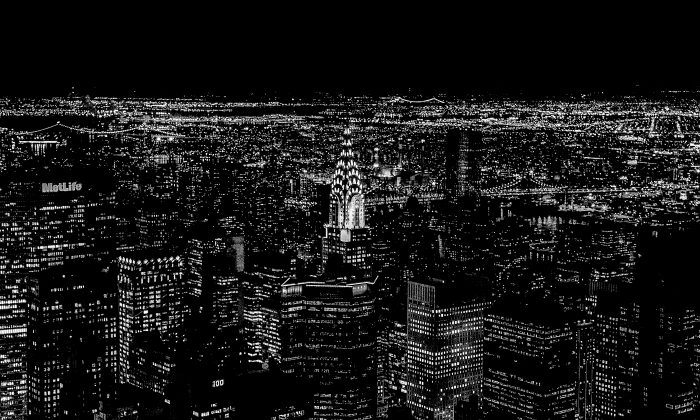 New Home: Photographed from the top of the Empire State Building Feb. 8, 2013, during Kude and Ili Aris's first visit to New York for their honeymoon in 2013—"It is then when we realized and decided that we will make New York our new home." (Kudegraphy)
New York

NEW YORK—Tasha Alias, a 30-year-old public relations and marketing executive originally from Kuala Lumpur, Malaysia, and her friends, were among over 100 local Malaysians who attended the Raya open house celebration of new beginnings at the Malaysian Consulate General on July 28.

She attended along with her friends and occasional creative collaborators, married couple Ili Aris and Kude (who declined to give his last name).

Hari Raya is one of Malaysia’s major public holidays, and for many New York Malaysians it marks the festive finale of 30 days of dawn to sunset fasting.

For Alias, Aris, and Kude, attending consulate events like the Raya open house is a way to stay connected to their cultural roots and pay homage to tradition.

The culture from their homeland permeates many facets of their New York lives—from the ethnic dress worn and traditional cuisine shared for events like Raya open house, to their collaborative artistic productions, seasoned with Malaysian style.

“Food, without a doubt, plays an important role,” said Alias, laughing exuberantly. She has lived, studied, and worked in New York for the past several years, since moving here.

“It’s a link that connects us (Malaysians living abroad) together—always present at every event, being served,” she adds.

According to Shamil, president of the local branch of the United Malays National Organization (UNMO), Hari Raya is a time for family and friends to come together; premised on surrendering grievance and “starting afresh.” “It’s open house; everybody invites everybody to their homes,” he said.

In keeping with custom, New York’s Consulate General of Malaysia opened house to any and all Malaysian nationals, expats, and their guests to celebrate in the comfortably modest confines of its 43rd Street address.

The Asian American Federation reports that there were over 2,000 ethnic Malaysians living in New York in 2010; their numbers increased by more than half from 2000 to 2010. Malaysians, with an array of professional backgrounds, from the pure sciences to multimedia, are choosing New York as their home and base of operations, and adjusting to life in “the city that never sleeps.”

According to Alias, the consulate is a vital hub and gathering place for Malaysians living in New York. It hosts events five to six times a year for such occasions as Malaysian Independence Day and Chinese New Year. Attendance ranges from 50 to 100 people, she said.

“Malaysians are more close-knit here, because there’s not a lot of us,” said Kude. Kude and Aris are partners in the visual arts. They moved to New York from Kuala Lumpur earlier this year.

“There were no family or friends when we came, just the two of us,” Kude adds.

While New York’s competitive intensity and isolation from family and friends have proved a considerable challenge, it has also been a source of creative drive and inspiration. “No matter where you migrate from, you have to work pretty hard,” Kude reflects. “There’s no safety net,” Ili adds, “it forces you to get more creative, more resourceful.”

For Alias, Aris, and Kude, creative enterprise has also served as a critical juncture for linking with other Malaysians and invigorating cultural connections.

The trio contributed their time, labor, and expertise to the production free of charge—”It’s not just about money; it’s about personal satisfaction, making friends,” explained Kude, echoing a deeply ingrained cultural appreciation of kinship and connectedness.

A heartfelt dedication to “lifelong friends” and to lessons learned on “life, love, marriage, and friendship” adorns the About Page of Kudegraphy.com—the couple’s visual arts business website. We’ll know we’ve succeeded in New York when we’re able to give something back, Kude concludes thoughtfully—to friends, parents, and the community of people who’ve lent support.

Kudegraphy is a visual arts company created by Kude and his wife Ili Aris who recently immigrated to New York City from Kuala Lumpur, Malaysia. Since launching their company in Malaysia, the couple has been the recipient of awards from a number of high-profile international publications.