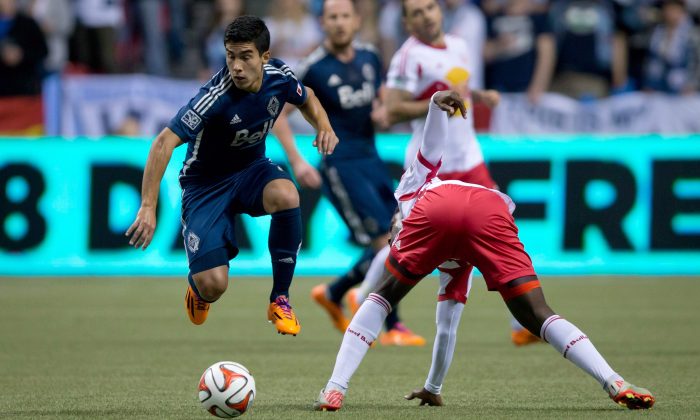 Major League Soccer Back With a Bang

Depth of competition is MLS’s strength
By Rahul Vaidyanath
Print

The weekend’s action didn’t even include Toronto FC, the MLS “offseason winner” with their big-name signings.

Three matches were unexpected lopsided victories and the other two were exciting 3–2 wins for the home side.

The first kick took place as Seattle visited the defending MLS Cup champs Sporting Kansas City. Two perennial playoff teams met with an unlikely hero—Chad Barrett—banging home a loose ball in the 94th minute to give the Sounders the 1–0 win.

More drama took place in Portland when Gaston Fernandez of the Portland Timbers was left unmarked and headed home the 1–1 equalizer in the 93rd minute against the Philadelphia Union.

In L.A., RSL goalkeeper Nick Rimando came up big against the likes of Keane and Donovan, but also, the replacement officials had an important say in the outcome.

Regular MLS officials are never far from controversy and the replacements somehow annulled an RSL goal, judged Joao Plata to be onside leading to his goal for RSL, and awarded a dubious penalty kick in stoppage time to L.A.

Without Thierry Henry and Jamison Olave, the Red Bulls were smashed 4–1 by Vancouver under new head coach and former Red Bull Carl Robinson.

New York’s only goal came after falling behind 4–0 as Vancouver’s keeper David Ousted failed to punch away a floating cross and Bradley Wright-Phillips flicked a header past him.

But New York’s defense was like Swiss cheese and gave far too much space to Vancouver’s attack.

Sebastian Fernandez blasted a spectacular right-footer past Luis Robles early in the second half for a 2–0 lead after Scotland international Kenny Miller had given Vancouver a first half lead with a penalty kick goal.

The Whitecaps welcomed designated player Pedro Morales to MLS. Morales set up Miller for an easy chip past Robles before one-timing a pass from Nigel Reo-Coker for his first MLS goal.

The Whitecaps didn’t seem to miss last year’s leading scorer Camilo and have a very bright present and future given the youth and depth of their squad.

Where MLS can say it has a leg up on the major European football leagues is the strength of the competition. You could also call it parity.

Over the last five seasons, comparing MLS with the English Premier League, Spain’s La Liga, Italy’s Serie A, Germany’s Bundesliga, and France’s Ligue 1 gives an illustration of this point.

The competition doesn’t seem so strong in Germany and Spain with the figure being 9.4 and 8.0 points respectively. Serie A and Ligue 1 were won by 5.6 points on average.

But beyond the top two teams, if we look at the point gap separating the winner and the fifth place team, we can get an idea of the depth of competition.

The average point gap between the Supporters’ Shield winner and the team with the fifth highest point total (regardless of conference) over the past five years in MLS is 8.8.

The next lowest average point gap is Ligue 1 with 17.8—more than double that of MLS. The worst (or shallowest competition by this measure) is Spain at 35.2. This should come as no surprise as Real Madrid and Barcelona tend to leave everybody else in their dust.

For completeness, the Bundesliga and EPL clock in at 21. Serie A is 18.6. This year, Bayern Munich is already 20 points to the good in the Bundesliga title race with 10 games left to play.

Welcome back MLS, we missed you!