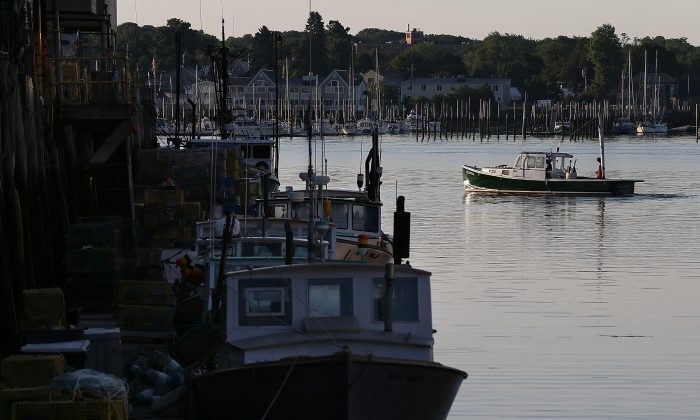 A fishing boat leaves the dock on July 21, 2012 in Portland, Maine. (Justin Sullivan/Getty Images)
US

A Maine fisherman has caught a rare iridescent lobster north of Chebeague Island in the Gulf of Maine.

Alex Todd, of Chebeague Island, made the catch and a picture of the creature was posted by Maine Coast Fishermen’s Association (MCFA) on its Facebook page on Aug. 24.

“A normal lobster gets its color by mixing yellow, blue, and red protein pigments,” the MCFA wrote. “Through different genetic mutations you can get a blue, yellow, or red (uncooked) lobster. You can also get strange mixtures of those colors as well.”

But iridescent is not one of those colors.

“This lobster probably has a genetic condition called Leucism, which isn’t a total loss of pigment (which would make it an albino) but instead a partial loss. This is why you can still see some hints of blue on the shell and color on the eyes,” the MCFA wrote.

One commenter on Facebook dubbed the rare catch a “unicorn lobster.”

Multiple commenters also hoped the creature was released back into the water.

The association noted the lobster was a v-notched female and as such Todd released her. The v-notch is a cut lobstermen make into one of the tail flippers of egg-bearing female lobsters to mark a known breeder and protect them from harvesting.

“If someone catches an interesting colored lobster they usually end up in an aquarium someplace or released back into the wild,” said Ben Martens, MCFA executive director, in an email.

Last year, Canadian fisherman Chad Graham of Nova Scotia’s Brier Island caught an iridescent lobster too. That one was darker and its oil- slick hue earned it a nickname “technicolor lobster.”

According to the Lobster Institute about one in every 2 million lobsters is blue, one in every 10 million is red (not cooked), one in about 30 million has a yellow or calico-spotted shell. Albino lobsters are about one in 100 million. Todd’s catch had a blue tint so it may be considered a blue lobster, but its lack of pigmentation makes it extra rare.

“Lobster are normally green and brown to blend in with the bottom of the ocean. A white lobster would stand out in the crowd making it more likely to be eaten,” Martens said. “As they get larger though lobsters have fewer and fewer prey so this one should be pretty safe for a while,” Martens said.