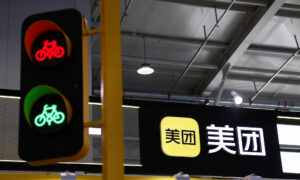 PARIS—Shares in LVMH were flat in early trading on Wednesday after the French luxury giant posted a strong rise in sales in its fashion and leather goods division in the third quarter.

LVMH, whose luxury products span Moët & Chandon champagne and Bulgari timepieces, said on Tuesday the popularity of its star labels Louis Vuitton and Dior helped its fashion and leather goods division, which accounts for nearly half of group sales, to report 24 percent growth.

Revenues for this business at the end of the quarter were 38 percent above their pre-pandemic, 2019 level, the same rate as in the first half.

“LVMH delivers another strong quarter”, analysts at Jefferies said in a note.

“While we remain cautious on the sector in the short term, we continue to view LVMH as the structural winner”, they also said.

Overall Like-for-like sales, stripping out the effect of foreign exchange fluctuations, rose by 20 percent to 15.51 billion euros ($17.91 billion) in the three months to September. Growth was roughly in line with an analyst consensus forecast for a 21 percent rise.