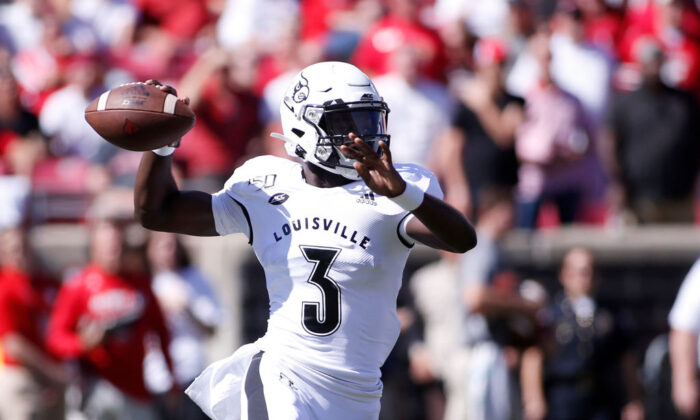 In a must-win game at Duke for a potential Bowl bid, Louisville QB Malik Cunningham gained a combined 527 total yards as the Cardinals were unstoppable defeating the Blue Devils in college football Thursday night.

Since the beginning of the Football Bowl Subdivision, Cunningham is only the second player with over 300 yards passing and 200 yards rushing in a game.

Cunningham was responsible for leading the Cardinals to eight of nine touchdowns; the Cardinals’ only punt occurred on the second drive.

He rushed for two touchdowns from 11 carries totaling 224 ground yards and passed for five touchdowns to all different receivers, with a completion percentage of 72, 18 of 25, for 303 yards.

“I was feeling pretty bad throughout the week,” Cunningham said.

Cunningham had back-to-back touchdown runs in the second quarter of 44 and 72 yards.

Prior to the game, Cunningham admitted that the offensive line has played well this year. He had been “taking care” of them with steak dinners on Thursday nights before home games.

“I felt I could have done better,” Cunningham said. “I left a couple yards out there.” He finished the game following a final TD pass to Tyler Harrell for 36 yards with 12:17 remaining in the fourth quarter.

“When Malik broke the line of scrimmage, there wasn’t anybody there,” Louisville coach Scott Satterfield said. “He had a calm about him, a great poise tonight. He let the offense come to him. But when it was time to shine, he did.”

“Since the beginning of the season, this is what we’ve been trying to do,” safety Qwynnterrio Cole said. “We finally put it together.”

Louisville head coach Satterfield added, “I just love where our team is at right now. There have been a lot of challenges and they’ve answered them.”

Louisville held Duke to just three field goals in the first half by Charlie Ham.

Duke finally scored a touchdown in the third quarter, 5:06, by Jalon Calhoun on a six-yard rush for a scoreline of 42–16. Riley Leonard scored on a 35-yard run to make it 48–16 at the beginning of the fourth quarter.

“Nothing turned out really the way you want it to turn out,” Duke coach David Cutcliffe said. “Obviously some parts of it went from bad to worse.”

Duke began the year with three non-conference wins but has since lost all seven conference games (3–7, 0–7).

Duke is not eligible for a Bowl bid and ends the season at home, on Nov. 27, versus Miami.

Louisville shall host their biggest rivalry game at home on Nov. 27 against Kentucky.