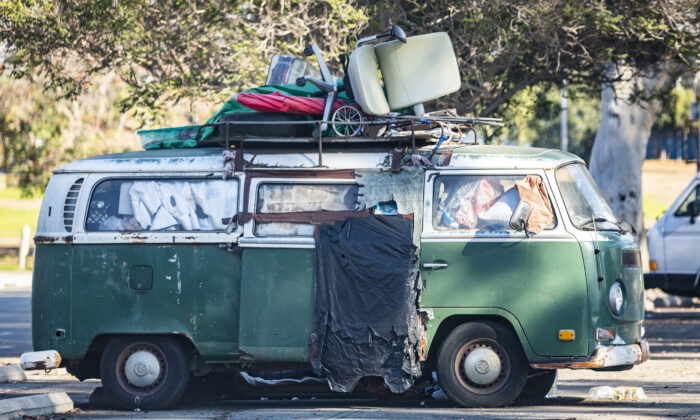 Homeless individuals living out of their cars park in the city of Westchester, Calif., on Dec. 12, 2021. (John Fredricks/The Epoch Times)
Southern California

Some Los Angeles residents fear a new homeless shelter may soon be coming to their neighborhood with elementary schools and a day care facility nearby, according to city documents obtained through a public records request made by the residents.

Community members in Westchester and Playa del Rey say they discovered city officials requested information on two properties owned by Los Angeles World Airports (LAWA) to potentially establish temporary pallet housing for the homeless. One of the locations—North of Westchester Blvd, east of Fire Station 5 and west of La Tijera—is an empty plot of land a few hundred feet south of a preschool through 8th-grade Catholic school.

“Our top concerns are safety of the kids. I mean, there’s drug abuse, defecation, there’s prostitution, there’s fights, there’s fire, like the list goes on and on,” Westchester resident Lucy Han told The Epoch Times.

The move comes as city officials grapple with pressure from residents to find housing options for homeless people living on the streets. About a third of voters said they have felt unsafe due to homeless individuals in their neighborhoods, with 39 percent saying they have considered leaving their city or neighborhood because of the issue, according to a 2021 poll conducted by the Los Angeles Business Council and Hart Research.

Meanwhile, city officials have been inquiring about empty parking lots, parks, vacant buildings, and unused industrial land for temporary housing units, pulling from the city budget and Proposition HHH funds. Prop. HHH—a $1.2 billion taxpayer-funded bond that was passed in 2016 by voters—promised 10,000 permanent supportive housing units for the homeless. But after five years, only 489 of those units have been built, according to a report from March.

Han, who has lived in Playa del Rey since 2006, said residents are compassionate and want to help elected officials find options to house the homeless in industrial areas. She suggested Manchester Square, which is also on the table as a potential pallet location, 10 miles from the LAX airport.

She said she discovered through city records that their district representative, Councilmember Mike Bonin, has been working with Congresswoman Maxine Waters since September to place other pallet locations in their district. But she and other residents are concerned the city is not communicating with the community before the properties are negotiated.

Lt. Geff Deedrick of the Los Angeles Sheriff’s Department Homeless Outreach and Services Team (LASD HOST) said he has never heard about any other proposed shelter locations near schools until this one.

“Being the subject matter expert, as someone who’s last 10 years of my professional life have been connecting those in the vulnerable population with services, it absolutely makes no sense to put a shelter like that near two schools,” Deedrick told The Epoch Times.

“If you’re going to have a shelter in a community, do it in a positive way where the community can help,” he said.

HOST is deployed in different regions throughout the county by Sheriff Alex Villanueva to connect the homeless with housing and mental health resources. They went head-to-head with Bonin over the summer when Villanueva directed them to clear encampments on the Venice Boardwalk. Shortly after, Bonin requested $5 million from the city to employ homeless-provider St. Joseph’s Center to also connect people with housing.

Venice residents and small business owners said crime has gone down since the boardwalk was cleared.

President of the Neighborhood Council of Westchester/Playa, Paula Garez, told The Epoch Times that Bonin’s office told her they don’t think the pallet shelter across from the elementary school will move forward.

“We’ve asked, ‘Well if you don’t think that it’s going to move forward, then remove it from consideration so that we can take all this hysteria from the neighborhood out of the mix,’” Garez said. “And they won’t do that, so that tells me there’s something there.”

Garez said the neighborhood has “gone into full effect,” with Han and another resident writing a letter addressed to Rep. Waters, the general manager of LAWA, and the Western Pacific Division Director Federal Aviation Administration opposing the shelter. It was signed by 400 additional neighbors.

The letter highlighted the rise in crime when there were more than 80 encampments in Westchester Park before it was cleared in October. Han said other temporary shelters in Bonin’s district, such as A Bridge Housing, have also attracted more homeless encampments outside of them.

“We really want to be preemptive about this and at least raise the visibility,” she said. “The principal didn’t know, the fire station chief didn’t know, and the residents didn’t know—we found this out through a [public records request].”

Garez said even though the neighborhood council hasn’t taken an official stance on the proposed pallet shelter in the neighborhood, residents fully support other shelter locations in the district owned by LAWA that are away from schools and residential areas.

“You’re having more homeless-on-homeless crime, more deaths of the homeless, more crime coming into the neighborhoods, and there’s no one that’s looking out for everybody,” Garez said. “And it should be equal protection, whether you’re house or unhoused.”

“There should be penalties. And to say that we’re NIMBYs or we don’t care about the homeless, nothing can be further from the truth,” Garez said. “We think that doing nothing and letting them exist in their squalor when we’ve raised billions of dollars—and we voted for this—we chose to give up our money, they’re not being respectful of that.”

Bonin—who is facing a recall effort—has been criticized by some of his constituents over his handling of the homeless issue. He recently voiced support for a large development project approved by the city council, which will include 140 housing units on city-owned parking lots in Venice on the Venice Boulevard median.

The councilmember said in a tweet that he supports a “a broad range of housing and services to address homelessness, including shared housing, motel conversions, master leasing and more. And we need projects like this—permanent supportive housing, which is the proven, most successful solution for chronic homelessness.”

The Los Angeles Housing Authority (LAHSA) reported in 2020 that Bonin’s district had the largest uptick in homeless numbers from the previous year—roughly 40 percent—with 3,165 unhoused individuals.

LAHSA also announced this month that the homeless rehousing system placed 10,373 people in permanent housing in the first six months of 2021.

Councilmember Mike Bonin, Congresswoman Maxine Waters, and LAWA did not respond to a request for comment by press deadline.