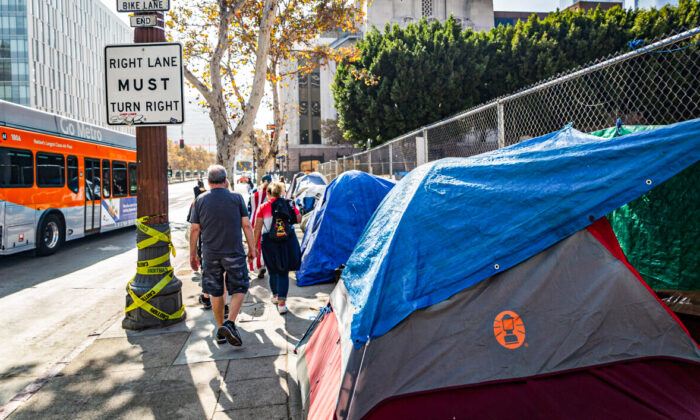 During a recent special meeting of the Los Angeles Homelessness and Poverty Committee, committee members approved a slew of motions granting more interim housing projects and allocating millions in funding for other taxpayer-backed homeless programs.

“Although we understand that interim housing solutions are not the final destination, not the panacea, we must recognize it is needed,” Councilman Kevin de Leon—who is now the chairman of the committee after the dismissal of former Councilman Mark Ridley-Thomas—said during the Nov. 15 meeting.

The city will move forward with leasing a total of 347 new units of permanent supportive housing across the city. A new tiny home village will also be built with 109 beds village in Council District 13 at 2301 W. 3rd Street, and the city will enter into a sublease agreement with Urban Alchemy, a nonprofit homeless resource founded in San Francisco, to run the site.

Several tiny home villages have recently popped up across the county as a more timely, cost-effective interim housing solution, while larger housing projects are more costly and take years to construct.

A pre-pandemic count in 2020 by Los Angeles Homeless Services Authority (LAHSA) found 66,436 people were experiencing homelessness in Los Angeles County, with 41,290 in the city of Los Angeles. Currently, the city has around 15,000 shelter beds and 24,600 permanent housing slots.

The city dedicated almost $1 billion to address the homeless crisis in its 2021-22 fiscal year budget.

The cost to build supportive housing units for the homeless—known as the Housing First model—has become a controversial solution to the booming crisis across the county, with critics saying there needs to be more wraparound services available to address drug addiction and mental illness for individuals.

De Leon reaffirmed the state’s Housing First method during the meeting, adding, “the ultimate goal is having permanent housing,” but that he would like to see standardized data metrics to track the efficiency of outreach efforts during the boots-on-the-ground phase of offering housing services to individuals.

“Now as we … acquire permanent housing, because the voters have approved initiatives in the past, they want action, so it’s not an acceptable option to allow individuals just to die on the streets of the city of L.A.”

The Los Angeles Homelessness and Poverty Committee—which had not convened for a few weeks—rejoined for a special meeting a few days after a homeless transient from Venice Beach, Brandon Washington, was arrested by the Los Angeles Police Department’s Pacific Bureau and booked on a felony charge Nov. 12.

Washington’s RV, along with a handful of other RVs, was parked outside of an upscale residential neighborhood between Abbot Kinney Boulevard and Electric Avenue, where he allegedly made threats to resident Deborah Keaton in a separate incident after ringing her doorbell.

Keaton told The Epoch Times she saw police officers removing weapons, including shotguns, from Washington’s RV as he was arrested.

“It confirms everything we’ve been saying for months—that the situation has been very scary, and it’s not just a matter of nice people falling down on their luck,” Keaton said.

Neighbors say loud music plays day and night from the RVs, and drug deals are often conducted outside of their homes, while trash has steadily built up around the area—triggering a local cleanup effort in September.

This is the seventh time Washington, 55, has been arrested in the last two years, according to inmate data. His next court date is Dec. 2.

Lt. Geoffrey Deedrick, head of the Los Angeles Sheriff’s Department Homeless Outreach Services Team (LASD HOST), told The Epoch Times “we’ve gotten a lot of calls” from residents along in the Abbot Kinney neighborhood begging for HOST to come into the area. He said he informed Steve Embrich, Los Angeles Police Department (LAPD) Captain of the Pacific Area division, of the neighbors’ concerns.

“About three weeks ago, I went to go look at it and some residents from the local community came and told me about all the deplorable conditions, all the crime that was that was going on there,” he said.

Deedrick said one of the major concerns he saw when visiting Abbot Kinney Boulevard was the RVs actively dumping sewage into the street.

“And so, I relayed those concerns, but since it wasn’t an assignment for the HOST team to go there. I’m not sure what the city has done to address that,” Deedrick said.

The cost to develop in Los Angeles comes with a hefty price tag. According to city documents, the new 109-bed tiny home village will cost nearly $1.9 million for leasing and operating services and other expenses.

In District 15, a 54-unit multifamily supportive housing project, known as Avalon 1355 in Wilmington, is currently underway. The complex was previously built as a Safeway Supermarket in the 1950s. The committee voted to approve $7 million from Proposition HHH funds for the project. Another $8.6 million was authorized for a project called Beacon Landing in San Pedro.

Proposition HHH was a $1.2 billion bond passed in 2016 by voters to build 10,000 permanent supportive housing units in Los Angeles. Since a majority of the housing units slated in HHH have been stuck in development pipelines for years after it was passed, with only 489 of the bond-funded units ready for occupancy in March, Los Angeles Controller Ron Galperin has urged the city to rethink its approach.

“While Los Angeles someday will see thousands of new units, it will be nowhere near enough to keep pace with the crisis in our neighborhoods. Over the past five years homelessness has jumped 40 percent in the City of Los Angeles. This year, four people per day will die simply because they remain unhoused. COVID-19 has made this catastrophe worse,” Galperin wrote in a Daily News op-ed.

The committee passed other housing development projects, including a 60-month lease agreement with the Daughters of Charity Foundation to establish and operate an interim housing site at 2301 West Third Street, in Council District 13. The total construction of the project will cost nearly $5 million.

Part of the homeless committee’s new effort to increase outreach and decrease recidivism includes a transfer of $1.4 million into hiring more outreach workers through LAHSA.

Homeless engagement workers, called CARE+ Teams, would attend cleanups by the Bureau of Sanitation to ensure they are being done humanely. However, the team themselves would not be providing housing; they would be referred to the head team in each district who would be able to provide those resources.

Councilmember Monica Rodriguez told the committee this new strategy is “more bureaucracy that we’ve added to facilitating this process.”

“And while everybody else is certainly buying into this one-trick pony solution, I’m into actually sustaining the progress of the solution,” Rodriguez said.

The committee debated for an hour before de Leon amended the motion to include on-the-spot housing resources offered by knowledgeable outreach workers.

“[We can] make it much more granular, so that you have outreach workers to specific locations, so that homeless people aren’t being contacted by 15 different outreach workers,” de Leon said.

Another homeless program receiving a large grant for fiscal year 2021-22 is the Los Angeles County Criminal Record Clearing Project to support the City Attorney’s Homeless Engagement and Response Team (HEART), which will cost around $1 million.

The program “helps individuals experiencing homelessness or those at risk of homelessness to resolve outstanding infraction citations and associated warrants.”

As for residents like Keaton who deal with the reality of the homeless crisis everyday, she said “the tiny homes are a really positive step.” But the location of some of these projects, such as in residential neighborhoods, she said “is terrible.”

“I think that that the only way to, first of all, contain this issue so that they’re not spread out all over our city and also provides services to people who really do need it is to be able to actually give them the services in a consistent fashion,” she said.