Londoner: Seeing the Inner Values We All Have Is the Best Part of Shen Yun 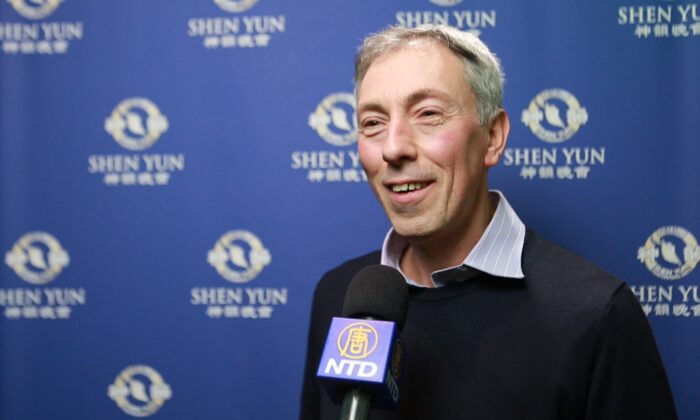 LONDON—Shen Yun Performing Arts continued to delight and surprise audiences with colorful, authentic Chinese culture and dance on its 2020 world tour, this time in London, England.

The spirituality on display from New York-based Shen Yun is what theatergoers often point to as their favorite aspect of the performance, and a refreshing change of pace from much of today’s mainstream offerings.

Angelo Consegniga said as much when he watched Shen Yun at the Eventim Apollo on Jan. 18, 2020.

“It’s kind of salvific, giving the idea back to God which brings us into life and we have to consider all the inner values that we all have. So that was really probably the best part of the show, I’d say,” Consegniga said, who is a financial consultant living in London.

“The show was really amazing. I like it both in the technical point of view, the movement, the choreography, the colors, but most of all, the meaning behind the show,” he added.

In Shen Yun’s nearly two dozen vignettes, classical Chinese dancers tell stories that depict ancient Chinese life, legends, and beliefs, including the Creator and other heavenly beings. Other dances give glimpses into folk cultures in and around China, and some depict modern China and the struggles faced there under the deadly persecution of spiritual believers face from the Chinese Communist Party.

Consegniga elaborated on the meaning he saw in Shen Yun’s stories.

“It touches something inside of yourself, I think. And that’s a good indicator of a show which is really good, honest, that makes you feel something, I would say.”

Consegniga said the artists’ personal practice shines through on stage.

“The impression that you get is you are looking at something that is very real, not just an artistic performance but a kind of message that goes from the performers to the public, to the whole audience, and I think everybody enjoyed it,” he said.

As for what that message was, Consegniga said “for me it was kind of a message pushing me to do better, to live better in my life to not give much importance of materialistic values—money, success. But what is really important is what you do for other people, so basically making this world a better place to live for everybody. I think that’s it.

“I would say that these [values] are fundamental. Fundamental because these are the kind of values that nowadays we need a lot because we live in a materialistic world, unluckily. We definitely need these. So, everything which brings the world in the right direction is more than welcome. Really glad of being here tonight,” he said.