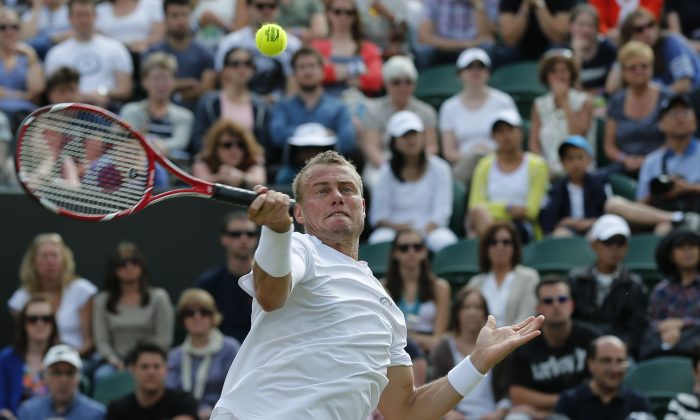 Lleyton Hewitt of Australia plays a return to Jerzy Janowicz of Poland during a men's singles match at the All England Lawn Tennis Championships in Wimbledon, London, Friday, June 27, 2014. (AP Photo/Ben Curtis)
Sports

Lleyton Hewitt, a former Wimbledon Champion, is out in the second round of Wimbledon 2014.

The unseeded Hewitt lost in a five-set match to fifteen seed Jerzy Janowicz.

See a Wimbledon update via the Associated Press below.

LONDON (AP) — In what might have been his final appearance at Wimbledon, 2002 champion Lleyton Hewitt produced one of his patented comebacks.

Coming from two sets down to level the match, the 33-year-old Australian and two-time major champion saved match points and broke the Open era record for most five-set matches at Grand Slam tournaments.

Hewitt, who previously shared the record with Andre Agassi, played his 42nd five-set match on Friday. The former world No. 1 has a win-loss record of 26-16 in five-set encounters, with only Pete Sampras having won more of those matches (29-9).

“I’d much rather win in three or four sets than go the distance all the time,” Hewitt said about the record. “I seem to put everyone through the wringer quite a bit.”

Hewitt, who was playing in his 61st Grand Slam tournament, gave a wave to the crowd at the end of the match and hinted at retirement during his post-match conference.

“You never know,” he said. “I’m one injury away from hanging up the bats at any time.”

Despite his aging legs, Hewitt, plagued by foot injuries throughout his career, pushed Janowicz hard in a match that resumed on Friday after rain forced it to be held over two days.

Janowicz wasted two match points in the third set tiebreaker, but regained his composure in the decider and closed out the match.

“He’s really, really good player,” Janowicz said. “It doesn’t matter how old he is. In my opinion, he will not finish the career like this. He will still play at least two more years. I hope I will not play against him anymore.”

Hewitt, who also won the 2001 U.S. Open, will continue to play at least until Flushing Meadows this year. But even the extended grass-court season starting from next year is not attractive enough to make him promise he’ll still be on the tour in 2015.

“I wouldn’t make my decision whether I keep playing or not just on that for sure,” he said.