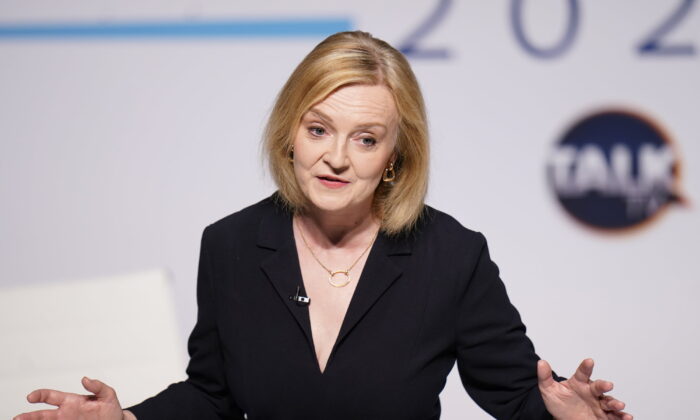 Liz Truss during a hustings event as part of the campaign to be leader of the Conservative Party and the next prime minister, in Darlington, County Durham, on Aug. 9, 2022. (Danny Lawson/PA)
UK

Foreign Secretary Liz Truss made a veiled dig at Conservative Party leadership contest rival Rishi Sunak by criticising a policy of “putting up taxes and then also giving out benefits” to help with the cost of living crisis.

Truss referred to it as “Gordon Brown economics” during a hustings debate in Darlington, in the northeast of England, on Tuesday night.

Asked how she would tackle the cost of living crisis, Truss said: “We are facing great difficulties with energy. I understand people are struggling with their bills on fuel and food but the first thing we should do as Conservatives is help people have more of their own money. What I don’t support is taking money off people in tax and then giving it back to them in handouts. That to me is Gordon Brown economics.”

“What I fundamentally don’t agree with is putting up taxes and then also giving out benefits. I think that is the wrong approach,” she added.

Energy bills have been rising—largely due to a rise in the global price of gas—for months and the consultancy firm Cornwall Insight predicted this week the average yearly bill could rise from £1,971 to £3,582 in October and could even reach £4,200 in the first three months of 2023.

Sunak, who was the Chancellor of the Exchequer when the pandemic struck Britain and was responsible for the furlough and for many other government handouts including the £150 energy bill rebate earlier this month, said he planned to target future support at those who were most vulnerable.

In May Sunak announced plans to give all households a £400 rebate off their energy bill, partly funded by a windfall tax on oil and gas companies.

Sunak, who quit as Chancellor last month in an ultimately successful bid to force out Prime Minister Boris Johnson, said: “I want to go further than I did previously because the situation is worse. It’s right that we target that on the people who most need our help.”

‘Tax Cuts Don’t Help If You Are a Pensioner’: Sunak

On Monday, Gordon Brown called on the government to take urgent action.

Writing in the Daily Record newspaper, he said: “Cobra, the UK Government’s disaster emergency committee, should be in permanent session to deal with the coming fuel and energy crisis. Even if Boris Johnson has gone on holiday, his deputies should be negotiating to buy new oil and gas supplies from other countries and urgently creating the extra storage capacity we currently lack.”