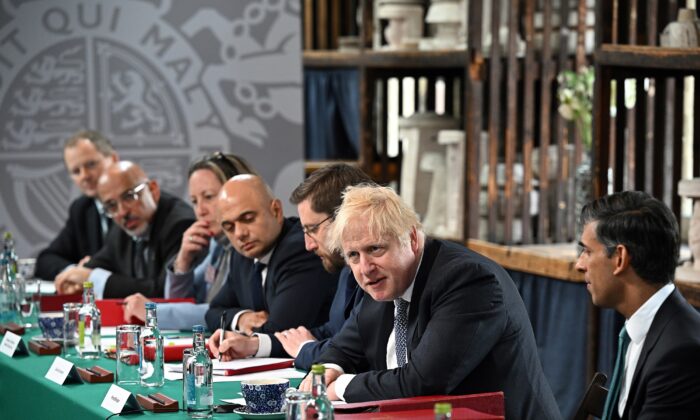 Johnson Reshuffles Cabinet After Shock Resignations of Sunak and Javid

Nadhim Zahawi became the UK’s new chancellor on July 5 as Prime Minister Boris Johnson was forced to reshuffle his Cabinet.

It follows the resignation of two secretaries of state and a flock of junior ministers after Johnson’s handling of sexual misconduct allegations against Chris Pincher tipped the scale against the prime minister.

Zahawi, who led the UK’s COVID-19 vaccines deployment during the first year of the pandemic and took over the job of the education secretary in the last Cabinet reshuffle, has now landed in Number 11 Downing Street as the new chancellor.

It comes a day before a raise of the national insurance threshold that Johnson hailed as the “biggest tax cut in a decade,” although it followed a national insurance rate hike, meaning many are paying more taxes than they did last year.

Michelle Donelan, previously the minister for higher and further education, filled the vacancy left by Zahawi and became the education secretary. The job she left remained vacant on Wednesday morning.

Steve Barclay, who served as Johnson’s chief of staff during the last Cabinet reshuffle, is now the health secretary.

The resignation of Javid and Sunak came after the prime minister admitted it was a “mistake” to keep Chris Pincher in government roles despite sexual misconduct allegations against him.

Downing Street said last week that Johnson wasn’t aware of any formal complaints against Pincher, only to admit this week that the prime minister was told about an investigation and had forgotten about it.

It triggered a round of resignations, dealing a major blow to Johnson, who narrowly survived a vote of confidence last month that saw 41 percent of Conservative MPs voting to oust him.

At least 10 other Conservative MPs have resigned from Johnson’s government so far, including Jonathan Gullis, parliamentary private secretary (PPS) to the secretary of state for Northern Ireland; Saqib Bhatti, PPS to the health secretary; Andrew Murrison, trade envoy to Morocco; Nicola Richards, PPS to the Department for Transport; Virginia Crosbie, PPS at the Welsh Office; Theo Clarke, trade envoy to Kenya; Alex Chalk, the solicitor general; Laura Trott, PPS to the secretary of state for transport; Robin Walker, schools standards minister; and Will Quince, children and families minister.

Quince defended Johnson on July 4, saying he had been “given categorical assurance that the prime minister was not aware of any serious specific allegation with regards to” Pincher.

In his resignation letter, Quince said he had “no choice” but to resign after he “accepted and repeated those assurances in good faith.”

Sally-Ann Hart, MP for Hastings and Rye, who backed Johnson in the confidence vote last month, said on July 5 that she is “no longer able to support Boris Johnson as leader of the Conservative Party and prime minister.”