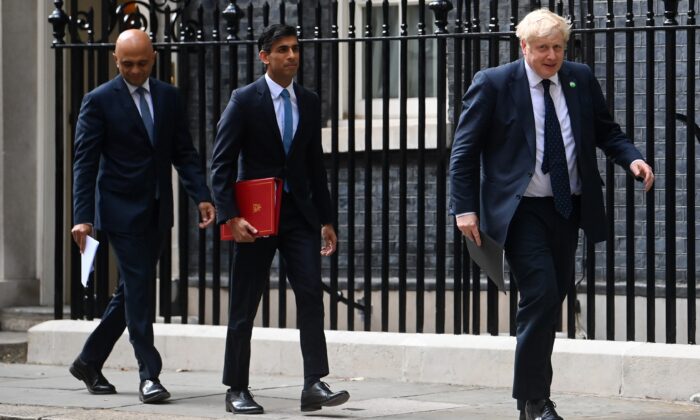 It comes after Johnson admitted it was a “mistake” to keep Chris Pincher in government despite sexual misconduct allegations against him.

Health Secretary Sajid Javid wrote on Twitter that he had tendered his resignation, saying it had been “an enormous privilege to serve in this role,” but he could “no longer continue in good conscience.”

Within minutes, Chancellor of the Exchequer Rishi Sunak post his letter of resignation on Twitter, adding: “The public rightly expect [the] government to be conducted properly, competently, and seriously.”

“I recognise this may be my last ministerial job, but I believe these standards are worth fighting for and that is why I am resigning,” Sunak wrote.

Culture Secretary Nadine Dorries voiced her support for the prime minister on Twitter, saying “I’m not sure anyone actually doubted this, however, I am 100 [percent] behind [Boris Johnson the prime minister] who consistently gets all the big decisions right.”

Javid: You Have Lost My Confidence

In a scathing letter, Javid said he no longer has confidence in Johnson’s leadership.

“The tone you set as a leader, and the values you represent, reflect on your colleagues, your party, and ultimately the country,” the letter reads.

“Conservatives at their best are seen as hard-headed decision-makers, guided by strong values. We may not have always been popular, but we have been competent in acting in the national interest,” Javid said. “Sadly in the current circumstances, the public are concluding that we are now neither.”

Javid said the vote of confidence Johnson survived last month, which saw 41 percent of Conservative MPs rebelling against the prime minister, “showed that a large number of our colleagues agree. ”

“It was a moment for humility, grip, and new direction,” he said, adding that it was “clear” that the situation will not change under Johnson’s leadership.

“And you have therefore lost my confidence too,” he concluded.

Javid also praised Johnson, saying he will “forever be credited with seeing off the threat of Corbynism,” “breaking the deadlock on Brexit,” and shining “a very welcome light on the regional disparities in our country.”

Sunak said it was not a decision he has taken lightly to resign when the UK is dealing with the economic consequences of the CCP (Chinese Communist Party) virus pandemic, the war in Ukraine, and other serious challenges.

“However, the public rightly expect [the] government to be conducted properly, competently, and seriously,” Sunak said. “I recognise this may be my last ministerial job, but I believe these standards are worth fighting for and that is why I am resigning.”

Sunak said he had been “loyal” to Johnson, publicly supporting him while having private disagreements, but he indicated some fundamental differences in the approaches he and Johnson want to take in running the country.

“Our country is facing immense challenges. We both want a low-tax, high-growth economy, and world-class public services, but this can only be responsibly delivered if we are prepared to work hard, make sacrifices, and take difficult decisions,” he said.

“I firmly believe the public are ready to hear that truth. Our people know that if something is too good to be true then it’s not true. They need to know that whilst there is a path to a better future, it is not an easy one. In preparation for our proposed joint speech on the economy next week, it has become clear to me that our approaches are fundamentally too different.”

The allegations have put Downing Street under pressure to explain why Pincher, who had resigned as a junior whip in November 2017 following a complaint that he made an unwanted pass at the former Olympic rower and Conservative candidate Alex Story, was given the job of deputy chief whip in February this year.

Downing Street previously said Johnson didn’t know about any specific allegations against Pincher before appointing him, but said on Tuesday that Johnson had been briefed about a formal investigation against Pincher in 2019 but forgot about it last week.

It came after Lord Simon McDonald, the then-Foreign Office permanent under-secretary who commissioned an investigation into the allegation against Pincher, published a letter saying Johnson was told about the outcome of the investigation.

Johnson acknowledged he should have sacked Pincher in 2019 instead of keeping him and appointing him to other government roles.

Asked if that was an error, Johnson said: “I think it was a mistake and I apologise for it. In hindsight, it was the wrong thing to do.

“I apologise to everybody who has been badly affected by it. I want to make absolutely clear that there’s no place in this government for anybody who is predatory or who abuses their position of power.”

Speaking to reporters in his House of Commons office, Johnson did not deny an allegation by his former adviser Dominic Cummings that said he had known Pincher’s behaviour before giving him a key job in the whips office, joking: “Pincher by name, Pincher by nature.”

“What I can tell you is that, if I look at the background of this and why I regret it so much, is that about three years ago there was a complaint made against Chris Pincher in the Foreign Office, the complaint was cleared up, he apologised,” Johnson said.

“It was something that was only raised with me very cursorily but I wish that we had—I, in particular—had acted on it and that he had not continued in government because he then went on, I’m afraid, to behave—as far as we can see, according to the allegations that we have—very, very badly.”

Johnson spoke to reporters as he faced a mounting Tory backlash over his handling of the row.

The prime minister’s authority has already been weakened by a confidence vote which saw 41 percent of his MPs try to oust him, amid lingering anger over the partygate scandal.