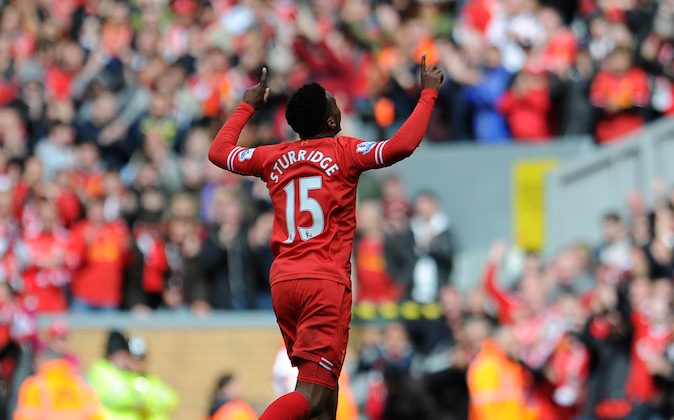 Liverpool's Daniel Sturridge celebrates after he scores the second goal of the game for his side during their English Premier League soccer match against Newcastle United at Anfield in Liverpool, England, Sunday May 11, 2014. (AP Photo/Clint Hughes)
Soccer

Martin Skrtel scored an own goal in the 19th minute.

Daniel Sturridge placed Liverpool ahead with a simple tap in from another Gerrard free kick in the 64th minute.

Shola Ameobi was sent off for dissent in the 66th minute.

Dummett has also been red carded for a dangerous tackle on Luis Suarez in the 86th minute, leaving Newcastle with 9 men.

Here is an AP report of the match.

LIVERPOOL, England— Liverpool came up short in its bid for a first league title in 24 years despite a come-from-behind 2-1 win over nine-man Newcastle that left the team two points behind champion Manchester City on Sunday.

With City winning 2-0 against West Ham, even a victory at Anfield would not have been enough for Liverpool to snatch the trophy from its northwest England rival.

The Reds did their part on the final day of the season, passing the 100-goal mark for the campaign after near-identical strikes in the space of two second-half minutes by Daniel Agger and Daniel Sturridge from Steven Gerrard’s free kicks.

Martin Skrtel’s own goal in the 20th minute put Newcastle in front before the visitors imploded after the break, with Shola Ameobi and Paul Dummett sent off.

If things had turned out differently, Liverpool’s final game of the season could also have been a celebration of the most unlikely title success in English football in a generation. Virtually the same Liverpool team had finished seventh last season, with a points tally 23 fewer than this year.

And the current Liverpool side had the Premier League trophy in its grasp three weeks ago, only for them to drop five points from games against Chelsea and Crystal Palace before the Newcastle match.

Liverpool finishes the season with 101 goals — only the second time it has passed the century milestone — and a club-record 26 league wins. But the biggest prize, the treasured league title, proved to be just out of reach.

Home fans filed into Anfield more in hope of winning the title than expectation, with Journey’s famous song “Don’t Stop Believin'” blaring out before kickoff. The stadium had previous form for last-game drama, with Arsenal winning 2-0 here in 1989 thanks to an injury-time goal from Michael Thomas to snatch the title from Liverpool’s grasp.

However, victory over a Newcastle team that had lost six of its last seven games and was winless at Anfield in 20 years was regarded by most pundits as elementary.

It proved anything but.

Misplaced passes, aimless crosses and suspect defending summed up Liverpool’s first half, with the home side lucky not to be further behind at the break than just Skrtel’s own goal in the 20th.

Yoan Gouffran was set free down the left and his cross was sliced into the net by the Slovakia international for his fourth own goal of the season.

With Liverpool already facing a huge task to just win its own game, news then filtered through of Samir Nasri’s opening goal for Man City. All hope had gone.

Anfield was virtually silent by the time City grabbed its second at Etihad Stadium at the start of the second half, but Liverpool steeled itself to finish the season on a high.

Gerrard crossed for Daniel Agger to volley in after 63 minutes and the England captain sent in another wicked delivery for Sturridge to poke in at the far post.

Ameobi was given two yellow cards in quick succession for dissent after Sturridge’s goal and Dummett was also dismissed for a reckless lunge on Luis Suarez, who failed to score the goal that would have taken him to 32 for the campaign — a record for a 38-game season.