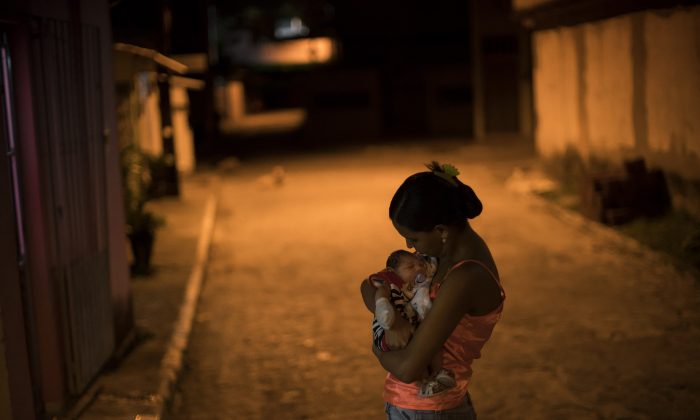 In this Jan. 26, 2016 photo, Daniele Ferreira dos Santos holds her son Juan Pedro, who was born with microcephaly, outside her house in Recife, Pernambuco state, Brazil. (AP Photo/Felipe Dana)
Americas

Life at Zika Epicenter a Struggle for Afflicted Family

RECIFE, Brazil—Around the fifth month of her pregnancy, Daniele Ferreira dos Santos fell ill with a high fever and angry red splotches on her skin.

But weeks later, when she went to the hospital for a prenatal exam, the news was horrific: The baby she was carrying likely had a severe brain injury. When Juan Pedro Campos dos Santos came into the world in December, the circumference of his head was just 26 centimeters, about 20 percent smaller than normal.

Santos was never diagnosed with Zika, but she blames the virus for her son’s defect and for the terrible toll it has taken on her life. Living in Recife in the northeastern state of Pernambuco, she is at the epicenter of the Zika outbreak, and Pedro’s is among 3,400 suspected cases of microcephaly that may be connected to the virus, though no link has yet been proven.

Originally from Africa, Zika spread to Asia and was first registered in Brazil in the middle of last year, spreading like wildfire through the northeast thanks in part to the region’s widespread poverty, equatorial heat and chronic infestations of the Aedes aegypti mosquito, which also spreads dengue fever and chikungunya.

“It’s the proverbial perfect storm,” said Dr. Albert Ko, a professor of epidemiology with the Yale School of Public Health, adding the region was likely at least one of the initial points of entry for the disease — which researchers theorize may have been introduced to Brazil by tourists visiting the country during the 2014 World Cup or an international canoeing event the same year.

“It may have been one of many introductions, but this is the one that took off,” said Ko. “In Brazil, infestation rates (of the mosquito) are highest in the northeast because of climactic reasons and socio-economic reasons, so it makes sense that … it really took off there.”

Mosquitoes have long been an inescapable part of the lives of the Santos family and their neighbors in a slum in Recife’s Apipucos neighborhood, where raw sewage flows in ditches, rain water from the frequent downpours in this equatorial city accumulates in fetid puddles, and the shores of a nearby pond are dotted with trash. Each soda bottle, yoghurt container and margarine tub provides an ideal breeding ground for Aedes.

“The mosquito is in all Recife. If I didn’t get it here, I got it at the place I work,” said Santos, a receptionist. “We all know that the risk (of contracting a mosquito-borne illness) is high.”

But it wasn’t always this way. Brazil once succeeded in eliminating the Aedes, which is well adapted to humans, lives within people’s homes and can breed in just a bottle cap of stagnant water. Massive eradication efforts in the 1940s and 1950s allowed the country to be declared free of the mosquito in 1958, but over the decades the insect returned, slowly encroaching from neighboring countries and finding fertile breeding ground in Brazil’s sprawling, unplanned cities, with their limited potable water systems and garbage collection.

“Because of irregular water distribution, many people, especially in poorer areas collect water in tanks … creating ideal breeding grounds for the mosquitoes,” said Dr. Ceuci Nunes, an infectologist at the Couto Maia Hospital in the northeastern city of Salvador. “The same goes with trash, which often goes uncollected.”

“There has been a lot of carelessness combating the mosquito,” she said, adding that many municipalities simply “failed to adopt adequate mosquito-fighting measures.”

In the face of the spiraling public health crisis, President Dilma Rousseff has declared war on Aedes, with the government promising to deploy some 220,000 members of the Armed Forces to go door-to-door to help educate the population about how to prevent the mosquito’s spread.

Still, officials on the ground in the epicenter of the crisis worry Rousseff’s declaration might be hollow.

Recife’s health secretary, Jailson Correia, an infectologist, said the city asked the federal government for $ 7 million for Aedes eradication programs back in November, as the link between Zika and microcephaly was emerging. The payout only came in January, he said, and it was only $300,000.

Area researchers are also exploring whether another type of mosquito endemic to Brazil’s northeast could also be a Zika carrier, and if so, whether it too may somehow lead to microcephaly. The carrier of West Nile virus, the Culex quinquefasciatus mosquito, is up to 20 times more prevalent in the region than Aedes, which could help explain the intensity of the Zika outbreak there.

If the hypothesis proves true, staunching Zika’s spread could prove more difficult than previously thought, said Constancia Ayres, a researcher with the Fiocruz Institute in Recife.

“If that’s the case, the problem is more complex. Only a proper sanitation system would help,” she said. “Culex reproduces in dirty waters, unlike Aedes.”

For the moment, the best way to avoid infection remains avoiding mosquito bites — a tall order in Recife, where worry over Zika’s effects has sparked widespread runs on mosquito repellents. And in the few spots where it’s still available, frenetic demand has helped push the price for what was already a costly product into the stratosphere. In Recife’s airport, a small bottle was running for $8 — a fortune in a region where the per capita household income is around $160 per month, according to the IBGE statistics agency.

The Brazilian government is now pledging to hand out repellent to low-income pregnant women, but the gesture is cold comfort to new mother Santos.

Asked whether she had any repellent, she just laughed. She has little reason to laugh these days.

Almost from birth, Pedro cried ceaselessly, as do many babies with microcephaly. He stops only the few hours when he’s asleep. During those precious hours, Santos keeps her fingers close to his chest so he has something of her to grab onto. Without that, he pinches himself awake with his tiny fingers.

Her husband was annoyed by the baby’s constant fussing, which distracted him from his television show, she said. He was also deeply chagrinned to have a son born imperfectly.

So a few weeks after Pedro came home, his father left. He took with him the flat-screen TV that was the centerpiece of their tiny home.