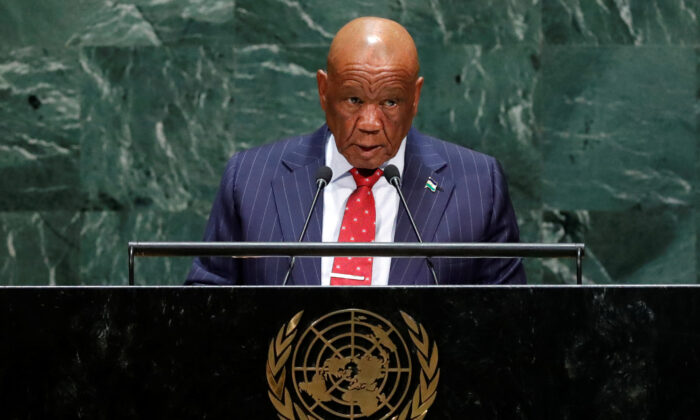 Lesotho PM, Named as Suspect in Murder Case, Bows to Pressure to Quit

MASERU—Lesotho’s Prime Minister Thomas Thabane bowed to pressure to resign on May 19, three months after police named him and his current wife as suspects in the murder of his former wife in a case that has transfixed the southern African nation.

Thabane’s departure marks the end of one of Lesotho’s longest political careers, one marked by exile, intrigue, tensions with the military, and a political crisis that deepened when police named him as a murder suspect in February.

“The time to retire from the great theatre of action, take leave from public life and office has finally arrived,” the 80-year-old Thabane told citizens in a speech on Lesotho TV.

His own All Basotho Convention (ABC) party, opposition figures, and South African mediators had all been pressing Thabane to resign over the murder case.

Maesaiah has been formally charged with the murder. Though named as a suspect, Thabane has not been charged. They both deny any involvement.

Lawmakers have said Thabane was not offered immunity from prosecution in return for stepping down, and it remains unclear whether he will now face any charges.

Finance Minister Moeketsi Majoro, named by parliament as Thabane’s replacement, is expected to be sworn in on Wednesday.

“I plead with the entire nation … to give my successor utmost support, and for my part I wish to assure him of my support,” Thabane said in his televised address.

Thabane’s coalition fell apart last week, leaving him with no legal choice but to resign.

“It is a relief and we believe … Lesotho will be steered to greatness and good governance as well as peace,” said Motlalentoa Letsosa, deputy leader of the Democratic Congress Party, the main opposition party which will now join a new coalition government under Majoro.

Lesotho, a small kingdom encircled by a South African mountain range, has seen several coups since gaining independence from Britain in 1966.

Its political upheavals often drag in South Africa, which gets some of its water from high-altitude Lesotho.