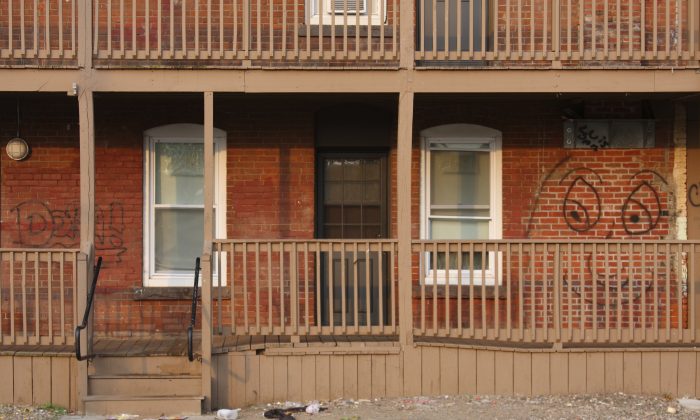 In many places, requirements for paint safety stop at the front door and do not cover exterior spaces and structures such as porches. (Denis Jr. Tangney/iStock/Thinkstock)
Health News

Lead Paint May Still Lurk on the Porch

Housing regulations have been key to lowering rates of lead poisoning, but new research finds that porches may remain a danger to children’s health.

“This study shows that porches are an important potential source of lead exposure for children,” says study co-author Katrina Korfmacher, director of the Community Outreach and Engagement Core of the University of Rochester Medical Center. “It is becoming clear that porch dust lead can be effectively reduced through repairs, cleaning, and maintenance.”

Lead is a neurotoxin and has significant health, learning, and behavioral effects, even at levels previously thought to be safe. While federal, state, and municipal laws have contributed to a significant decline in the overall levels of childhood lead poisoning, rates remain high in some communities, particularly low-income urban areas with older rental housing.

An estimated 19 percent of homes in the United States contain lead paint hazards; this number rises to 35 percent in the homes of individuals below the poverty line. In Rochester, N.Y., where the study was conducted, more than 86 percent of the housing stock was constructed prior to the ban on lead paint in 1978.

Some local communities, including Rochester, have adopted ordinances that require owners and landlords to take steps to ensure that the interiors of rental properties are “lead safe.” However, in many instances these requirements stop at the front door and do not cover exterior spaces and structures such as porches.

No communities have standards limiting the amount of lead in dust on porches, because there is no federal standard and there has been limited evidence that mitigating lead hazards in these instances is feasible.

Porches hold the potential to be a source of lead hazards for young children, either from lead dust being tracked or blown into the house or through direct exposure. This is especially true in urban neighborhoods where porches often serve as the “front yard” where children play.

After the porches were replaced or repainted, the porch dust lead levels significantly declined, indicating that property owners can effectively address the hazard.

The study also finds that when interiors were treated for lead paint but no work was done on the exterior, the porch dust lead levels rose immediately after work, most likely from workers tracking dust and debris onto the porches.

These findings appear to indicate that steps taken to make the interior of homes more “lead safe” may inadvertently be causing the porches to become more hazardous.

“Without a porch standard, no one was held accountable for cleaning porches after interior renovations,” says lead author Jonathan Wilson, acting director of the National Center for Healthy Housing (NCHH).

“Lead on porches should be addressed and standards for porch lead dust must be adopted to protect children from inadequate cleanup.”

The new study was a partnership among NCHH, the University of Rochester Medical Center, the City of Rochester, and Action for a Better Community, a Rochester-based nonprofit organization. The U.S. Department of Housing and Urban Development provided funding for the work, which appears in the journal Environmental Health.

From University of Rochester via Futurity.org