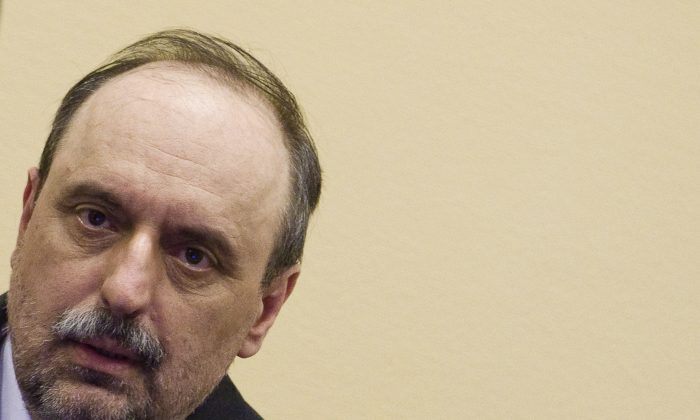 Goran Hadzic, the wartime leader of Croatia's rebel Serbs is seen in court in The Hague Monday July 25, 2011, to hear charges of murdering hundreds of Croats and expelling tens of thousands, in the final case to reach the U.N.'s Yugoslav war crimes tribunal. Hadzic, 52, was the last fugitive among 161 military and political leaders of the Balkans conflicts indicted by the court since it was created in 1993 while the Yugoslav republics were still in flames. (AP Photo/Jerry Lampen, Pool)
Europe

THE HAGUE, Netherlands— Lawyers for a former leader of rebel Serbs in Croatia are urging the Yugoslav war crimes tribunal to drop the case against him because he is terminally ill with brain cancer.

In an urgent motion released Thursday by the International Criminal Tribunal for the Former Yugoslavia, lawyers for Goran Hadzic say “no reasonable prospect remains of bringing criminal proceedings against Mr. Hadzic to completion” because of his limited life expectancy. They are calling for the case to be halted altogether or permanently stayed.

Parts of the motion that showed how long Hadzic is expected to live were redacted.

Hadzic was arrested in 2011. His trial, the final case to start at the UN tribunal, got underway in October 2012 and has been repeatedly interrupted by his ill health.