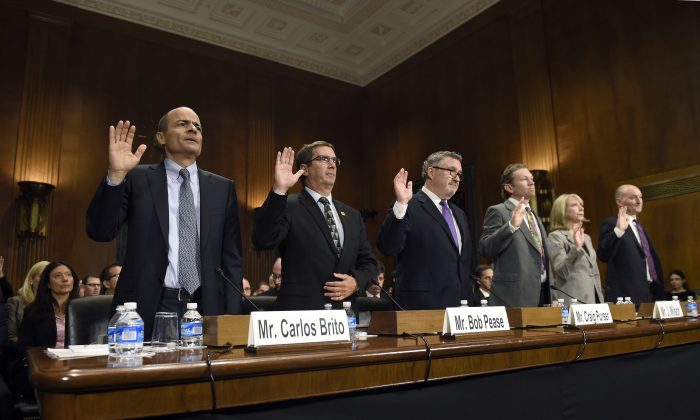 Lawmakers: Deal to Create Megabrewer Could Cause Hangover

WASHINGTON—Castle Danger Brewery in Two Harbors, Minnesota, has been brewing what it calls “dangerously good ales” on the north shore of Lake Superior since 2011. The company outgrew its original home in tiny Castle Danger and now distributes beer to bars and restaurants throughout northern and central Minnesota.

Sen. Amy Klobuchar (D-Minn.) hails the brewery as an example of the growing craft-beer industry in her state and says she fears that a deal to merge the world’s biggest beer companies into a megabrewer could make it harder for Castle Danger and other small brewers to sell their brands.

Klobuchar and other lawmakers from both parties raised questions at a Senate hearing Tuesday on the proposed $107 billion takeover by the world’s largest brewer, Anheuser Busch InBev, of rival SABMiller. The combined company would control nearly a third of the global beer market.

“Wholesalers make decisions everyday on what brands to put on their trucks,” Klobuchar said. “By working to ensure those decisions are driven by consumer demand and not producer power, we can help competition in the beer industry remain on tap.”

Sen. Chris Coons (D-Del.) said he worried the merger could harm Delaware-based brewers such as Dogfish Head and 16 Mile.

“Nobody wants to take a seat at a bar and find out that their only options are Bud and Miller,” Coons said. “I’m deeply concerned this merger will squeeze out the small and independent craft brewers in Delaware and across the country at the cost of innovation, consumer choice and jobs.”

Beer Merger Will Not Bring Budweiser, Miller Under Same Roof

Carlos Brito, CEO of Anheuser Busch InBev, tried to reassure lawmakers, saying the proposed merger was not about squeezing out smaller competitors in the United States, but instead was intended to open markets in Africa, Asia and Central and South America.

Under the deal, the Miller brand would be sold to rival Molson Coors, which would have full control of operations.

The merger “is about bringing more choices to more consumers around the world, including extending the reach of iconic American brands such as Budweiser to new markets,” Brito told a Senate Judiciary subcommittee on antitrust, competition policy and consumer rights.

By selling the popular Miller brand to Molson Coors, the deal ensures that Anheuser Busch InBev’s market share in the U.S. will not change, Brito said.

“If anything, this deal will create an even more competitive landscape in the U.S. by creating a stronger competitor in Molson Coors,” he said.

The U.S. beer industry is more competitive than ever with the strong growth of craft beer and increased competition from wine and liquor, Brito said.

In the U.S., craft beers account for about 11 percent of beer sales, compared with about 1 percent 25 years ago.

“You have these little businesses in Two Harbors, Minnesota, who see a threat” that the combined giant breweries “have this kind of market power in terms of the distribution system,” she said.

Belgium-based Anheuser Busch InBev, already the world’s largest brewer, makes Budweiser, Corona, Stella Artois and Beck’s. SABMiller, based in London, has Miller Genuine Draft, Peroni and Milwaukee’s Best among its 200 or so brands.

Craig Purser, president and CEO of the National Beer Wholesalers Association, said the sheer magnitude of the merged companies could make competing difficult for smaller companies. Large brewers can “exert pressure on independent distributors not to carry rival brands and on retailers to design their shelves to disfavor or remove rival brands,” he said.

Diana Moss, president of the American Antitrust Institute, an advocacy group that promotes competition in the economy, said the proposed merger could raise beer prices for consumers and reduce choice and diversity in the marketplace.

Moss suggested a number of conditions that could be imposed on the new megabrewer, including restrictions on how it distributes beer to wholesalers and retailers.

Klobuchar, the subcommittee’s ranking Democrat, agreed. While she said she does not oppose the merger, “it seems like there should be some conditions to protect this growing industry, which is all about U.S. jobs,” Klobuchar said.

Jamie MacFarlane, co-owner of Castle Danger Brewery, said in a phone interview that the company has no positon on the proposed merger. But she did not sound worried.

“I do feel that a big reason why craft breweries are so prevalent right now is because people like local, and they want to know where their beer is coming from,” she said.