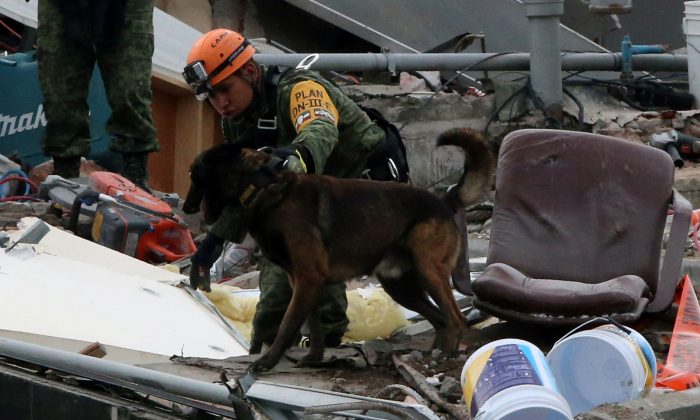 A Mexican soldier and his dog search for survivors in the rubble of a collapsed building after an earthquake in Mexico City, Mexico on Sept. 23, 2017. (REUTERS/Henry Romero)
Americas

MEXICO CITY—A magnitude 6.2 earthquake that shook southern Mexico on Saturday spread fear in the capital and frustrated rescuers, some of whom were forced to suspend the search for survivors of an earlier, bigger tremor.

The United States Geological Survey said the new quake was relatively shallow with an epicenter near Juchitan, a tropical region of Oaxaca state hard hit by another major earthquake on Sept 7.

In Mexico City, where the tremors were mild, no new damage was reported. But rescue efforts at a collapsed residential building in the Tlalpan neighborhood of Mexico City were suspended because of a risk that buildings already damaged by Tuesday’s quake would collapse.

At least 305 people died in the quake on Tuesday.

“We hear that there are possibly more people alive, but the clock is ticking and they are injured and dehydrated,” said Jose Juan Sanchez, 28, a crane operator who had been helping to clear rubble. “It’s frustrating not being able to do anything.”

At other sites, soldiers and volunteers continued efforts to reach quake victims even after seismic alarms rang out in the city, sending thousands of startled residents running out onto the streets, many in pajamas, shortly before 8 a.m.

In Oaxaca, another smaller earthquake was felt at 8:24 a.m. President Enrique Pena Nieto said a bridge near Juchitan collapsed along with other infrastructure weakened by the earlier tremors.

In a Mexico City shelter housing those who have lost their homes in the quakes, people stood in a circle and prayed after the alarm sounded on Saturday.

Near a collapsed office building in the trendy Roma district, the earthquake alarm sounded twice and people gathered in the street for about five minutes, but calm prevailed and normal activity resumed in about five minutes.

When Tuesday’s 7.1 magnitude quake hit, Mexico was already reeling from the Sept. 7 earthquake that killed at least 98 people and was the strongest in the country in 85 years.

At least 52 buildings were brought to the ground by Tuesday’s earthquake and an army of trained rescuers and scores of volunteers have been frantically removing rubble in a day-and-night search for survivors.

Apartment buildings, offices, a school and a textile factory were among the structures flattened, leaving thousands homeless.

Officials said there could be some 20,000 badly damaged homes in the adjacent states of Morelos and Puebla. RMS, a risk modeling company, estimated economic losses of $4 billion to $8 billion.

After several days of searching, rescuers have been finding more corpses than survivors, and frustration was mounting at what some said was bad organization at rescue sites and uneven delivery of food aid.

“Whoever you ask will tell you the same thing, it is bloody outrageous that the government is not helping,” said rescue volunteer Angel Castellanos, 35, adding that local authorities in Tlalpan had only sent police as security to the site.

The government has organized a massive search and rescue operation involving thousands of soldiers and police, but in outlying areas of the city and surrounding villages, victims complain that help has been slow to arrive.

Mexican volunteers, professionals and soldiers backed by teams from countries as far away as Japan have so far saved 60 people from the rubble but nobody has been found alive in the past 24 hours.

Tuesday’s quake hit on the anniversary of the deadly 1985 tremor that by some estimates killed 10,000 people. A government response panned as lacking at the time severely damaged the credibility of the ruling Institutional Revolutionary Party.

Mexico is better prepared to deal with the aftermath of earthquakes nowadays, helped by disaster planning, civic groups, a stringent building code and communication technology.

Despite the shrinking odds that more survivors would be pulled out from huge piles of debris, workers at many sites said they would not give up if there was the faintest chance of success.

By Noe Torres and Daniel Trotta