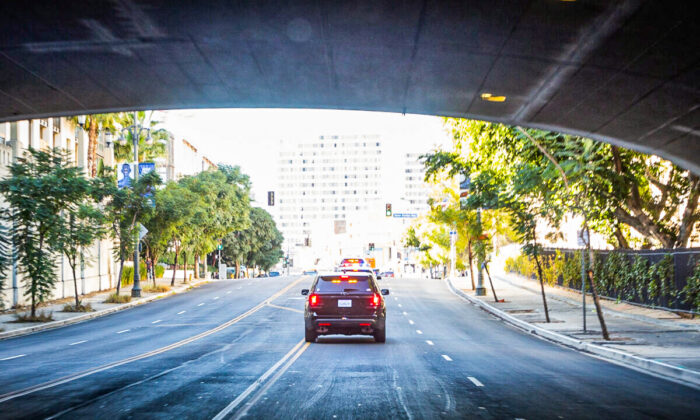 The board voted to extend the contracts with law enforcement agencies for the first half of 2022, with an option to extend for 12 more months. In accordance with a plan to “reimagine public safety,” the presence of police officers might be gone or greatly reduced in the Metropolitan Transportation system once the current contracts expire.

The proposals for altervative public safety measures will be further developed by the board in collaboration with the Public Safety Advisory Committee (PSAC).

The item was introduced by Jacquelyn Walker-Dupont, second chair of the board, along with other board members: County Supervisors Janice Hahn, Holly Mitchell, and Hilda Solis, and City Councilman Mike Bonin.

Walker-Dupont said though she had some concerns, she ultimately supported the motions, having confidence that the PSAC “will provide continuous support to find a better way.”

“We’ve not been able to find a right solution, but will continue to struggle with [it],” she said.

Bonin said during the meeting that the Metro should take a “layered approach,” including combining ambassadors, mental health professionals, and law enforcement together.

However, former Glendale Mayor and board member Ara Najarian disagreed, saying that he could not take PSAC recommendations seriously as the committee lacks diversity and doesn’t have law enforcement experts or crime victims.

Solis, however, noted that decisions are ultimately up to the board and that ambassadors can call officers or paramedics if necessary.

The board committed $40 million to the upcoming fiscal budget, which will run from July 2022 to June 2023, to develop a strategy to identify certain stations for “reimagining public safety” pilot programs, which require collaboration between the board and the PSAC in the design, implementation, and evaluation of programs.

For the current fiscal year, the board in March already committed $40 million to public safety alternatives, but none has been spent yet, and staff is working on the details with PSAC, said Judy Gerhardt, Metro security chief, during the meeting.

Hahn also introduced an amendment to the item requiring law enforcement officers contracted by the Metro to be vaccinated against COVID-19.

LA County Sheriff Alex Villanueva previously said he won’t be enforcing the county’s vaccine mandate for employees, saying the enforcement would likely cause him to lose employees during a time where his department is already understaffed.

The Metro is currently contracted with the LA Sheriff’s Department (LASD) and the LA and Long Beach police departments.

Villanueva voiced his opposition to the item on Dec. 1 in a social media livestream.

He said he would probably submit a plan to the board for the sheriff’s department to take over all the policing duties on Metro’s public buses and trains, arguing that his department would help save millions of tax dollars.

The LASD oversaw all Metro policing until 2017 when the LA and Long Beach police departments took on some of the duties.

Villanueva said the LAPD has accumulated $75 million in overtime wages, but since LASD’s transit services operate 24/7, the Metro would not be charged for any overtime pay.

The sheriff’s department is expected to shrink by 200 to 300 deputies by March, according to Villanueva, who blamed the hiring freeze imposed by the LA Board of Supervisors on the LASD earlier this year.

This comes as Metro Data reports a 25 percent increase in violent crimes for the first nine months of 2021—compared to September 2020—as more people return to work in person amid the pandemic.

On Nov. 21, an LASD deputy shot a man who allegedly had just killed someone at the Willowbrook/Rosa Parks Metro Station, according to an LASD press release.

Before the PSAC alternatives are ready, $75.2 million will be authorized to cover the Metro’s remaining six months of law enforcement contract and provisions to extend the contract for up to 18 months.

Correction: A previous version of this article’s headline and opening paragraph were focused on the LA Metro Board’s long-term goals to reduce the presence of law enforcement officers and adopt alternative public safety measures, rather than the immediate impact coming from the board’s decision during the meeting, which was its 6-month extension of current contracts with law enforcement agencies. The Epoch Times regrets the error.