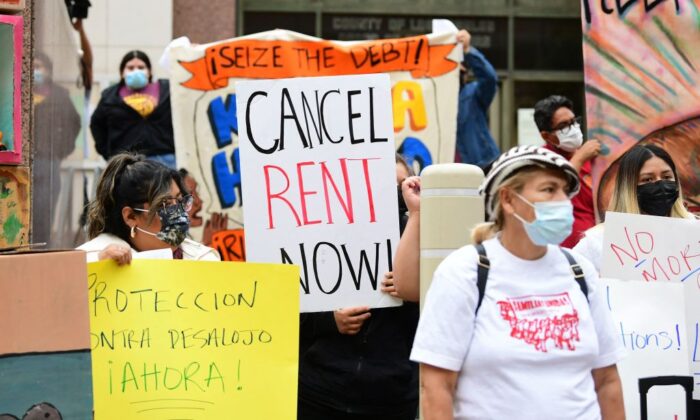 People gather to advocate for an extension of the Covid-19 tenant protections in Los Angeles, Calif., on Sep. 27, 2021. (Frederic J. Brown/AFP via Getty Images)
Southern California

LOS ANGELES—Despite vehement opposition from one of its members, the Los Angeles County Board of Supervisors voted on Jan. 25 to extend eviction protections for many pandemic-impacted tenants in unincorporated areas through the end of the year.

Supervisor Sheila Kuehl championed the extension of the eviction protection and associated freeze on rent hikes, insisting that despite signs the current surge of COVID-19 cases fueled by the Omicron variant of the virus is waning, thousands of people are still facing financial hardship and could face eviction for their inability to pay thousands of dollars in back rent.

“I’m very happy to see our businesses reopening and people going back to work,” Kuehl said. “But the 250,000 people who became infected in the last seven days most likely do not have sick leave. And so when they have to quarantine in a home or place that they count on to be able to sleep and try to get well, they are not earning money, because they’re not being paid for being sick. This is happening to hundreds of thousands of our residents every week.”

But the extension met with the ire of Supervisor Kathryn Barger, who cast the sole vote against the move and said landlords have suffered enough financial harm—sometimes by tenants taking advantage of the eviction moratorium to avoid paying rent.

Barger said county businesses have remained open despite the Omicron-fueled COVID surge, and the county is even preparing to host a Super Bowl. She also said vaccination rates are growing, and combined with residents who have developed natural immunity, “we are effectively living with COVID-19 in our community.”

“We do know we can keep our economy open as cases ebb and flow. This was proven this winter,” Barger said.

“Landlords are saying enough is enough,” she said, calling on the county to develop a plan for phasing out eviction protections. She called the extension of an eviction moratorium “a gross expansion of renter protection policy with no clear end in sight.”

Supervisor Janice Hahn also expressed concern about the impact on landlords, and she called for the county’s lobbyists in Sacramento to work to increase funding for impacted property owners. “Landlords are people too,” she said. In the end, however, Hahn supported the extension of tenant protections.

The move was loudly opposed by landlords and apartment and rental associations.

“No other business sector has been forced to do what we’ve had to do for almost two years now—renters don’t even have to present any proof of financial hardship,” Diane Robertson, co-founder of the Coalition of Small Rental Property Owners, said in a statement. “The decision to extend this moratorium totally disregards us landlords who are just like our renters. We live in the same communities, many times in the same rental properties. We rely on our rental income to live. What kind of protections and support are available to us?”

The board’s action keeps in place existing protections—which originally had been set to expire at the end of January—against “no-fault” evictions through March 31.

Beginning April 1, the county will reinstate protections for renters who fail to pay their rent. But starting June 1, the protection for non-payment will be provided only to lower-income tenants—those who make up to 80 percent of AMI, the area median income.

Some other tenant protections will also be lifted on June 1, with many others being lifted at the end of the year. The eviction protection for non-payment by lower-income tenants will continue until June 2023.

After the board voted 4–1 to approve the extension, Barger introduced a motion asking for a report in two weeks on the feasibility of the county forgiving or postponing property tax payments on rental properties for which a landlord did not receive rent due to the county’s eviction moratorium.

The board eventually approved the motion asking for the report, although Supervisor Hilda Solis said the county has previously been advised that it cannot legally waive property tax payments, only penalties and fees assessed due to late payments.