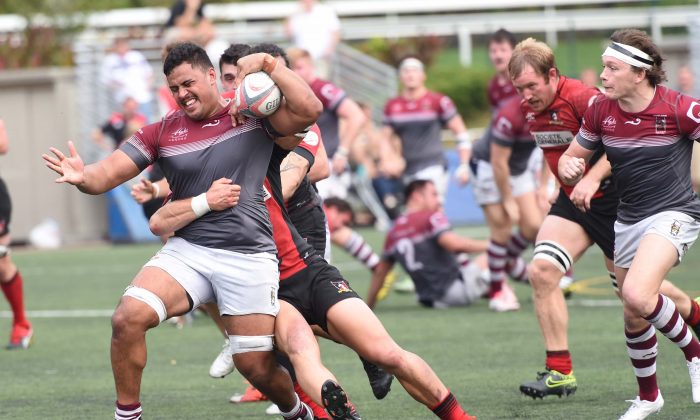 Kowloon Prise Open the Premiership With Win Over Valley

HONG KONG—The results on Saturday Jan 7, 2017 in the Hong Kong Rugby Premiership prised open the League and Championship. For the past four seasons the silverware has been shared between Valley and HKCC: it is unlikely this season, as all six teams look competitive for the Championship, and four teams could win the League.

It looked as though the half was going to end all-square, when Valley was reduced to 14 men, with a yellow card against lock Martin Muller. This opened the game up, enough to give the Kowloon backs the space needed to test and expose the Valley defense. An excellent counter attack started by Neville on the halfway line, with quick passing between the Kowloon support players, saw flanker Jack Sawyer finish-off the move in the right hand corner. Neville converted, and Kowloon went into halftime leading 20-13.

The second half was dominated by Kowloon. After 5minutes, a short pop pass from Neville to centre Ben Madgwick, cut through the Valley defense to score under the posts from 25metres. An easy conversion for Neville and Kowloon led 27-13.

For the rest of the half, Kowloon put Valley under pressure: and again Valley went down to 14 with a yellow card against flanker Nick Hewson, but despite numerical superiority, territory and dominant possession, Kowloon could not cross the line again. The score remained 27-13 for a deserved victory that would have been sweeter with a bonus point.

The difference in the two sides was in the backs: Neville, Madgwick and fullback Chris Kinloch countered and ran at Valley throughout the game to stretch the Valley defense and create openings: the Valley backs were surprisingly ineffectual. In the forwards the contest was even: Valley winning the set piece, but Kowloon the loose. The two yellow cards against Valley tilted the balance in favour of Kowloon.

Losing this game was a setback to Valleys hopes of winning the League, and results of the other matches did not help Valley. In a tight contest at Kings Park, Bloomberg Hong Kong Scottish came from behind to beat Borrelli Walsh USRRC Tigers 35-27. Behind at halftime 6-20, Scottish scored three tries in the second half by centre Conor Hartley, for the bonus point victory. At Hong Kong Football Club, Nataxis HKFC beat Herbert Smith Freehills HKCC with a try in the final two minutes to give them a narrow but well-earned bonus point victory, 31-28, having at one stage trailed HKCC 12-25.

Valley remains top of the league with 35points, but Scottish a point behind with 34. Kowloon and HKFC both have 26points, followed by HKCC with 16 and Tigers with 14. Four teams can win the League, and with the closely contested nature of the matches throughout the season, any side could lift the Championship silverware.

Photos from the Borrelli Walsh Tigers to HK Scottish match at King’s Park are shown below.