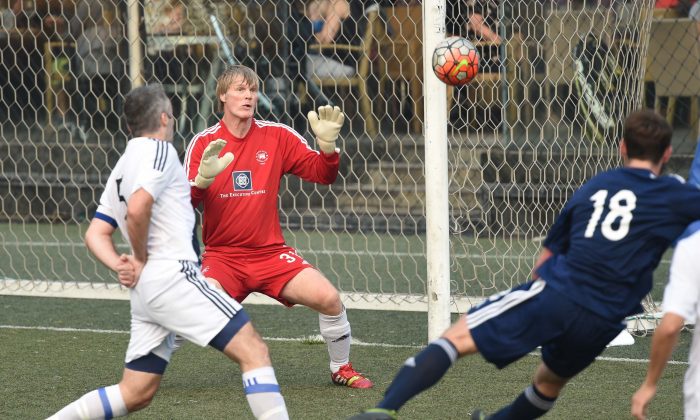 HONG KONG—The first game of last weekend Jan 7-8, 2017 in the BOC Life HKFA Premier League was between South China and Kwoon Chung Southern on Saturday  (Jan 7) at Aberdeen Sports Ground, with Kwoon Chung Southern prevailing courtesy of a 43rd minute winner from Diego Gallardo. After a short corner from Leung Tsz-chun, the ball was played on by Wellingsson Da Souza before Gallardo headed the ball into the net.

In the later game, leaders Eastern Long Lions took on bottom of the table HKFC at Mongkok Stadium. Eastern Long Lions got off to a flyer in the 3rd minute when Jaimes Mckee fed Giovane Da Silva who fired past HKFC goalkeeper Issey Maholo, and followed up with Mckee then playing in Manuel Rodriguez who drove the ball into the net for a 2-nil lead. Despite the early set backs, and continued pressure and chances from Eastern Long Lions, HKFC managed to keep the lead at 2 goals until the half time break, However, Eastern Long Lions added a 3rd in the 57th minute, when Tse Man-wing scored from the rebound after Giovane Da Silva’s shot had hit the crossbar, and quickly increased the lead to 4-nil in the 60th minute when Lee Hong-lim netted after receiving a pass from Li Ka-chun. Eastern Long Lions pushed home their dominance in the last 10 minutes, and extended their goal difference, by scoring a 5th in the 83rd minute when Lee Hong-lim surged down the left wing before cutting into the box and firing home, a 6th in the 89th minute when Diego Moreira finished after HKFC had failed to clear a corner, and a 7th when Manuel Rodriguez headed home a corner kick.

On Saturday (Jan 8) Wo Foo Tai Po took on Lee Man Rangers at Tai Po Sports Ground, and ended with a comfortable 3-nil victory. Wo Foo Tai Po took the lead in the 14th minute after a move involving Yuto Nakamura and Manoel Santos ended with the ball with Wong Wai, and his shot was deflected past goalkeeper Chiu Yu-ming for the opener. Manoel Santos then headed in Wong Yiu-fu’s corner in the 50th minute, before wrapping up the points in the 88th minute when Luis Nunes headed in Manoel Santos’ free kick for the 3-nil victory.

In the later game BC Glory Sky faced KMB Yuen Long at Hammer Hill Road Sports Ground. BC Glory Sky took a 2 goal lead through a 44th minute opener when Everton Camargo scored via the post with a free kick, and he then made it a brace in the 60th minute finishing a move from Mirko Teodorovic and Liu Pui-fung. However, KMB Yuen Long quickly reduced the deficit in the 63rd minute, when Aleksander Randelovic headed in a cross, equalised in the 74th minute when Chan Hin-kwong fired in the rebound from Diego Higino’s shot, and then snatched the winner in time added on through Aleksander Randelovic.

In the day’s late game, and the final game of the round for the weekend, Kitchee played R&F at Mongkok Stadium, with Kitchee getting off to flying start with Alessandro Leonardo turning in Fernando Pedreira’s cross in the 3rd minute. Kitchee doubled their lead in the 36th minute thanks to a 30 yard drive from Matthew Lam past goalkeeper Xing Yu, and extending their lead to 3-nil in the 41st minute after Fernando Pedreira headed in Matthew Lam’s left wing free kick. Kitchee added further goals in the 76th minute when Alexander Akande finished off from a ball from Lam Ka-wai after he received the ball after Jared Lum had won the ball in midfield, and sewed the game up in the 88th minute when Fernando Pedreira’s shot went in off  Alessandro Leonardo for a final 5-nil scoreline win.

Kitchee lead the table with 27 points from 11 matches, with Eastern Long Lions second with 26 points with a game in hand.

In the thirteenth round of first division matches, Albion gave hope to the chasing pack with a 1-nil win over Wanderers in the top of the table derby at Sports Road, inflicting Wanderers with their first defeat of the season, Swiss XI were 2-1 winners against French Kiss, Baker Tilly Spartans won 1-nil against Colloids FC, GAS won 2-1 against KCC Dragons, and Colts were 3-1 victors over Squadron.

Wanderers lead the table with 31 points, Colts and Albion are joint 2nd with 28 points and GAS 4th on 27 points after 12 matches

Azzurri and Carnegies Boca Seniors are joint league leaders with 31 points from 13 matches, with HKU70’s 3rd with 26 points from the same games.

In the third division, Power 22 were 3-1 victors over Darts, Maccabi HK were 6-1 winners against Scorpions, Friends of  Barclays won 3-1 against Outward Bound, Antonhill were 3-nil victors over Goal Visio, and HOB drew 1-all with HKSS.

Maccabi HK lead the table with 34 points from 13 matches, with Antonhill 2nd with 29 points, and Yan Po 3rd with 28 points from 12 matches.

Green Cypress lead the table with 28 points from 12 matches, with Corinthians second with 26 points from the same games.