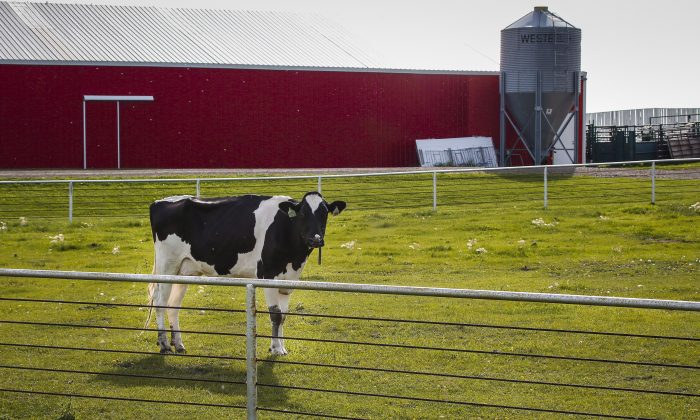 A dairy farm near Calgary. Researchers say young children who drink whole cow's milk are leaner and have higher vitamin D levels than those who consume low-fat or skim milk. (The Canadian Press/Jeff McIntosh)
Canada

Researchers say young children who drink whole cow’s milk are leaner and have higher vitamin D levels than those who consume low-fat or skim milk.

Their study of more than 2,700 children aged 1 to 6 found those who drank whole milk had a body mass index score almost a full unit lower than kids who drank 1 percent or 2 percent milk.

Principal researcher Dr. Jonathon Maguire of St. Michael’s Hospital in Toronto says that’s comparable to the difference between having a healthy weight and being overweight.

Maguire speculated that children who drink whole milk may feel fuller than those who drink the same amount of low-fat or skim milk, and may not end up eating as many high-calorie foods.

Health Canada and leading pediatric organizations recommend that children under 2 consume only whole milk, but then be switched to low-fat milk to reduce the risk of obesity.

Published in the American Journal of Clinical Nutrition, the study also found that children who drank one cup of whole milk each day had comparable vitamin D levels to those who drank nearly three cups of 1 percent milk.

That may be because vitamin D, which is added to all milk products for good bone health, is fat-soluble, meaning it dissolves in fat rather than water. Maguire says milk with higher fat content may contain more vitamin D.

“Children who drink lower-fat milk don’t have less body fat, and they also don’t benefit from the higher vitamin D levels in whole milk,” he said. “It’s a double-negative with low-fat milk.”

The findings suggest current guidelines around children’s milk-fat consumption should be re-examined to make sure they are having the desired effect, he said, pointing out that childhood obesity has tripled in the last 30 years, while consumption of whole milk has dropped by half over the same period.

“What kind of milk our children should be consuming is something we need to seek the right answer for,” Maguire said.