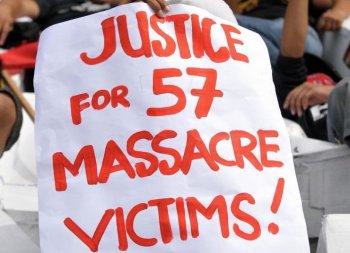 A placard is held up as protesters remembering the 57 victims from Nov. 23 massacre in the southern province of Maguindanao rally in front of the National Bureau of Investigation in Manila on Dec. 10 where a principal accused in the killings is currently (Jay Directo/AFP/Getty Images)
World

Kidnapped in Philippines, Some Children and Teachers Escape

Jasper Fakkert
Editor-in-Chief, U.S. Editions
Jasper Fakkert is the Editor-in-chief of the U.S. editions of The Epoch Times. He holds a Bachelor's degree in Communication Science and a Master's degree in Journalism. Twitter: @JasperFakkert
View profile
Follow
biggersmaller
Print
Fifteen men, carrying assault rifles, abducted children as they waited for class to start on Dec. 10. The latest clan fight in the Philippines took place at the New Maasim Elementary School in the south as seventy-five people were snatched, including four teachers and a number of children.

The gunmen, from the Manobo tribe, told police they demanded the leader of a rival clan to surrender. The rival clan is allegedly responsible for the killing of Manobo’s leader, Datu Ondo Perez, local media reported.

According to The Philippine Star, the Manobo tribe had asked for assistance from the government but received no response. The Philippines Daily Tribune reported that the kidnappers also requested cigarettes and batteries for flashlights.

During the course of the day, 17 of the kidnapped children were released, along with one adult. Two teachers also managed to escape.

In a separate incident on Thursday, gunmen captured Orlando Fajardo, vice president of state-owned State College on the southern Island of Basilan, according to local media. The kidnapping comes a day after the head of another hostage was found in a bag in a park, after a ransom wasn't paid.

Violence is increasing across the across the Philippines; the country is still recovering from a bloody massacre last month that killed 57 civilians, including 26 journalists and media workers, on the southern island of Mindanao.

The massacre was an attempt to prevent Esmael Mangundadatu, a political rival of the ruling Ampatuan clan, from running for governor in next year’s local elections. The attackers reportedly raped, tortured, and beheaded some of the victims. Most of the bodies were found in mass graves.

Philippine president Gloria Arroyo has proclaimed martial law in Maguindanao and sent troops to the region. Among the 161 murder suspects are about 100 identified militiamen, with only two of them in custody, according to an AP report.

The Senate in the Philippines published an investigation on Dec. 8 showing politicians using members of civilian volunteer organizations and citizens Armed Forces Geographical Units as their private armies, according to Philippine media Abante.

Norberto Gonzales, Philippine defense secretary, was quoted as saying, “There are one million loose firearms and 132 private armies all over the country.”

The military found, stuffed in a cemented wall in a warehouse, heavy explosives including mortars, missiles, rockets, and rifles, on Dec. 9 according to the Philippine Daily Inquirer. The weapons are believed to belong to a clan.