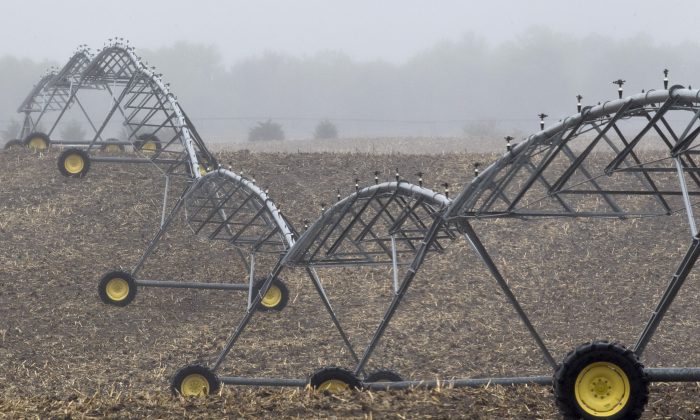 An irrigation pivot remains still along highway 14, several miles near the proposed new route for the Keystone XL pipeline in Neligh, Neb. , April 19, 2012. Congress is scrambling to vote on the Keystone XL oil pipeline, but the project could still end up before an obscure commission in Nebraska that regulates telephones, taxi cabs and grain bins. (AP Photo/Nati Harnik)
US

Keystone Pipeline Fate May Be in Hands of Obscure Nebraska Commission

LINCOLN, Neb.—Congress is suddenly scrambling to vote on the Keystone XL oil pipeline, but the fate of the oft-delayed $5.4 billion project could still wind up in the hands of an obscure commission in Nebraska that regulates telephones, taxi cabs and grain bins.

The Nebraska Supreme Court is expected to rule within weeks on whether the Nebraska Public Service Commission must review the pipeline before it can cross the state, one of six on the pipeline’s route. Nebraska Gov. Dave Heineman gave the green light in January 2013 without the panel’s involvement.

The commission’s possible role is part of the tangled legal and political history of the pipeline and raises questions about whether it will continue to be snagged even if the Senate votes to approve it next week as expected. The House voted 252-161 Friday to move forward with the project. President Barack Obama, who has delayed a decision pending the resolution of the Nebraska issue, has not said whether he would sign the legislation.

The proposed crude-oil pipeline, which would run 1,179 miles from the Canadian tar sands to Gulf coast refineries, has been the subject of a fierce struggle between environmentalists and energy advocates ever since Calgary-based TransCanada proposed it in 2008.

“I don’t know if they think they can just override Nebraska,” said Randy Thompson, one of three landowners who filed suit to challenge the state’s approval process. “If we win our case, I assume TransCanada is going to have to go back to the drawing board.”

A district court in February ruled that a law that gave Heineman the authority to approve the project ran afoul of Nebraska’s constitution.

While there’s no way to tell how the Nebraska Supreme Court will rule on the issue, the justices tend to defer to the lower courts’ decisions, said Anthony Schutz, a University of Nebraska associate law professor.

“The separation of powers argument is a pretty powerful argument,” Schutz said. “We’ve spent a lot of time since the early 1900s finding ways to distribute executive power, and the governor is left with a fairly limited realm of authority.”

The high court has two justices appointed by Heineman, a Republican, and five by former Democratic Gov. Ben Nelson.

Project supporters say the pipeline should now be ready to go forward even if TransCanada has to seek the state’s approval once again.

“We believe the federal government has taken entirely too long to make a decision. I don’t see any issue with the Senate voting on it and the president approving it” before the Nebraska issue is resolved, said Ron Kaminski, business manager for the Labors’ Local No. 1140, an Omaha-based union that supports the project.

Nebraska officials became supportive of the pipeline after TransCanada agreed to change the route to avoid the ecologically sensitive Sandhills region in the remote northern part of the state. In 2012, the Republican-controlled Legislature passed a law allowing Heineman to give the go-ahead.

But opponents have charged that the state constitution gives that power to the Nebraska Public Service Commission.

The elected commission regulates “common carriers” that are used to transport goods, energy and people. The panel includes four Republicans and one Democrat. The commission generally takes about seven months to approve or deny an application, said Dave Domina, an attorney for the landowners.

The Nebraska attorney general’s office has argued that the 2012 law was constitutional.

The resistance to the pipeline remains strongest in Nebraska on the pipeline’s route. Governments of the other states have been supportive, citing the construction jobs it would create. A majority of Nebraska residents now support the pipeline, according to independent surveys, but pipeline opponents say 115 of 515 Nebraska landowners along the proposed route have refused to sign agreements with the company.

Even if the project wins final approval, property owners want assurance that money will be set aside for land restoration in the event of any leaks, said Jane Kleeb, executive director of Bold Nebraska, a leading opposition group.

“I have no option but to be optimistic,” Kleeb said. “These farmers are the reason I do this every day.”

Dan Frost, a Denver attorney who specializes in pipelines and infrastructure projects, said regulatory agencies like Nebraska’s Public Service Commission would subject a project to a more thorough review than a governor would.