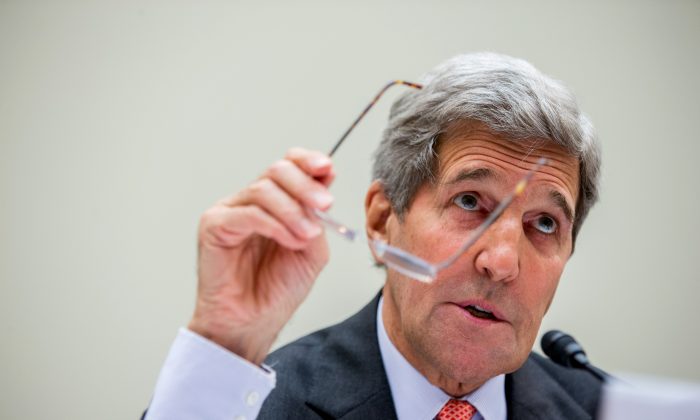 WASHINGTON — Secretary of State John Kerry says the United States is committed to increasing the number of refugees it is willing to take in as U.S. allies in Europe struggle to accommodate tens of thousands of refugees from the Middle East and Africa.

After closed-door meetings on Capitol Hill Wednesday, Kerry said President Barack Obama has made it clear that the U.S. wants to take a leadership role on humanitarian issues.

“We are looking hard at the number that we can specifically manage with respect to the crisis in Syria and Europe,” he said. “That’s being vetted fully right now.”

Kerry met with members of the House and Senate Judiciary committees. He did not give any specifics on the number of additional refugees the U.S. may be willing to take.

The U.S. has vowed to help its European allies with an escalating migrant crisis. White House press secretary Josh Earnest said Tuesday that the Obama administration has been looking at a “range of approaches” for assisting U.S. allies with 340,000 people freshly arrived from the Middle East, Africa and Asia. Many are fleeing parts of Iraq that are under the Islamic State group’s control.

Shortly after Kerry’s meetings, Republican Sen. John McCain of Arizona went to the Senate floor to urge stronger leadership from Obama on stemming violence in the Middle East and North Africa. He stood next to an enlarged, close-up photo of the dead body of three-year old Aylan Kurdi, a Syrian boy who drowned along with his 5-year-old brother and mother when their small rubber boat capsized as it headed for Greece.

“This image has haunted the world,” McCain said. “But what should haunt us even more than the horror unfolding before our eyes is the thought that the United States will continue to do nothing meaningful about it.”

Democratic presidential candidate Hillary Rodham Clinton, Kerry’s predecessor, called for an “emergency global gathering” at the United Nations General Assembly meeting later this month, where countries could pledge aid money and to accept some of the migrants. The event would be similar to a gathering convened after the 2010 earthquake in Haiti.

“The United States has to be at the table, has to be leading it,” she said Wednesday in Washington. “This is a global responsibility.”

While Germany braces for some 800,000 asylum seekers this year, the U.S. hadn’t previously said if it would increase its worldwide quota for resettling refugees from 70,000. Only a fraction of those would be Syrians, who must first navigate a multiyear application process before learning if they can start a new life in the United States.

The U.S. resettlement process for refugees, as it stands, is slow. They can wait around three years to find out if they can move to the United States, meaning Washington wouldn’t be able to offer Europe much in quick assistance. Throughout Syria’s 4½-year civil war, the U.S. has accepted only about 1,500 Syrians — a tiny percentage of the 11.6 million people who have been chased out of the country or uprooted from their homes.

After the fall of Saigon in 1975, the U.S. accepted more than a million refugees from Vietnam, Cambodia and Laos. In 1999, tens of thousands of mostly Muslim Kosovar Albanians were flown to the U.S., processed at Fort Dix in New Jersey and ultimately resettled. During the Iraq war, more than 50,000 refugees were allowed to come under a special, expedited program for people whose religious beliefs or past work for the U.S. military put their lives at risk.

But what those crises involved and Syria’s may lack is a sense of U.S. responsibility. Refugee operations in Southeast Asia followed years of U.S. warfare there, as did the decision to take in tens of thousands of Iraqis over the last decade. Many Americans will feel differently about taking large numbers of Syrians displaced by a war that the United States has tried hard to avoid.

In addition, U.S. intelligence officials say they are concerned that the flow of migrants into Europe has been infiltrated by Islamic State group extremists who are bent on carrying out terror attacks.

“As they descend on Europe, one of the obvious issues that we worry about, and in turn as we bring refugees into this country, is exactly what’s their background?” Director of National Intelligence James Clapper said Wednesday during an industry conference. “We don’t obviously put it past the likes of ISIL to infiltrate operatives among these refugees.”

Clapper said the issue was “a huge concern of ours.” He added that the U.S. is aggressively screening the small number of Syrian refugees it has accepted, but he said he was not sure every European country was screening with similar vigilance.

Asked directly if the Obama administration felt responsible to share Europe’s refugee burden, Earnest stressed U.S. support thus far: $4 billion in humanitarian aid, more than any other country has provided, and ongoing diplomatic work to resolve Syria’s conflict peacefully. The diplomacy appears nowhere near ending violence that started in 2011 with a government crackdown on political opponents, spawning an armed insurgency and eventually leading to Islamic State extremists seizing much of the country.