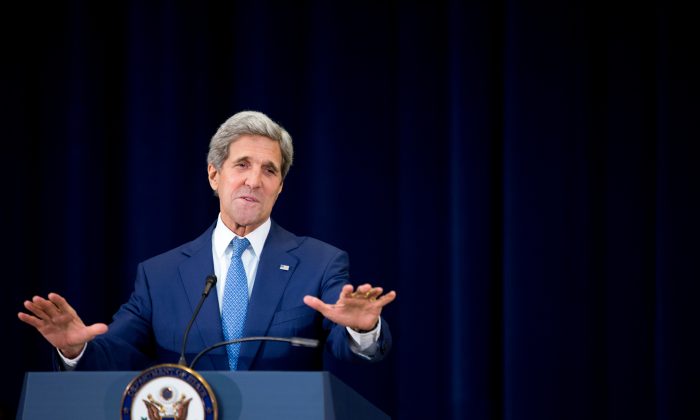 Secretary of State John Kerry during a news conference at the State Department in Washington on Monday, July 27, 2015, on the 2015 Trafficking in Persons Report. (AP Photo/Andrew Harnik)
International

VIENNA—U.S. Secretary of State John Kerry opened talks in Vienna on Friday with his Russian, Saudi and Turkish counterparts aimed at reviving a moribund effort to end Syria’s civil war.

Kerry began a day-long series of meetings at a luxuy hotel in the Austrian capital by consulting with Saudi Arabian Foreign Minister Adel al-Jubeir and Turkish Foreign Minister Feridun Sinirlioglu, both of whom share the U.S. view that Syrian President Bashar Assad must go for the conflict is to be resolved. Kerry then met separately with Russian Foreign Minister Sergey Lavrov, whose country is Assad’s prime backer.

None of them spoke to reporters at either meeting, both of which took place ahead of a four-way encounter set for later in the day.

On Thursday in Berlin, Kerry said one focus of the talks would be to consider “a broader participation of very necessary countries, all of whom need to be at the table” to discuss the way forward in Syria. Russia is keen to bring Assad’s other main supporter, Iran, into the talks, but Saudi Arabia in particular is opposed.

Kerry said all the countries with an interest in Syria, including Iran and Russia, agree on what the result should be: a unified, secular and pluralistic Syria governed with the consent of its people. He said that Assad’s continued presence is the only thing preventing that goal from being realized.

“One thing stands in the way of being able to rapidly move to implement that, and it’s a person called Assad — Bashar Assad,” he said. “So the issue is, can we get to a political process during which time the future devolution and allocation of power in Syria is properly allocated by the people of Syria? And that’s what we’re working towards. So my hope is that these talks can begin a process that could open up a greater discussion.”

Syria is now in its fifth year of a civil war that has killed hundreds of thousands, contributed to a massive refugee crisis in Europe and been complicated by the emergence of the Islamic State group and Russia’s direct military intervention.

Friday’s meeting in Vienna — the site of the world’s last major international diplomatic success, the Iran nuclear deal in July — follows a surprise visit by Assad on Tuesday to Moscow where he and Russian President Vladimir Putin discussed Russia’s military operations in Syria that the U.S. and others say are bolstering Assad and not targeting Islamic State militants, as Russia claims.

Putin said Thursday that Assad had told him that he is ready for a dialogue with his political foes. Putin also defended Russia’s bombing campaign, which he said would set the stage for peace talks.

A military victory over the militants “will not solve all problems, but it will create conditions for the main thing: a beginning of a political process to encompass all healthy, patriotic forces of the Syrian society,” Putin said. His words echoed those of Syrian government officials who have expressed readiness to negotiate with the “patriotic” opposition — a term generally used to describe unarmed, mostly Damascus-based government critics who are tolerated by Assad.

The Kremlin said Putin also talked by phone with the leaders of Turkey, Saudi Arabia, Egypt and Jordan about Syria. Kerry plans to travel to Jordan late Friday and then Saudi Arabia.

Meanwhile, in televised remarks on Thursday, Lavrov said he wanted to provide “firsthand information” about the Russian air campaign against Islamic State militants in Syria, but also talk about a future political process. He said Moscow is eager to invite other countries from the region to the talks, especially Iran. Without Iran’s involvement, Lavrov said Moscow “remained convinced” that a settlement of the Syrian crisis had no future.