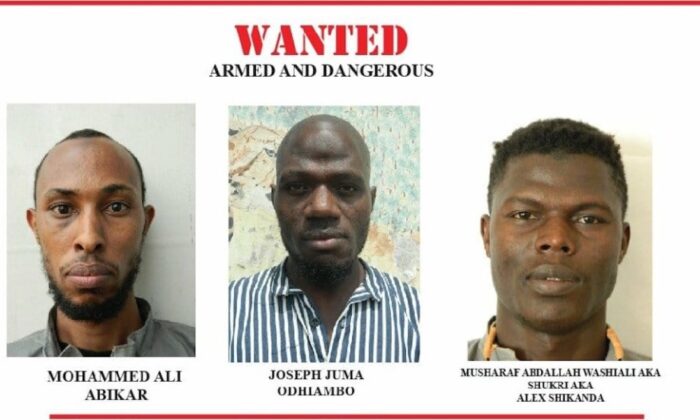 NAIROBI—A Kenyan serving a 41-year sentence for involvement in one of the country’s worst militant attacks escaped from a maximum-security prison on Monday, along with two other inmates detained for terrorism-related offences, authorities said.

In a statement, Kenya’s Directorate of Criminal Investigations named one of the escapees as Mohamed Ali Abikar, sentenced to 41 years for a 2015 attack on Garissa University that killed 148 people, mostly students.

Describing all three as “dangerous”, police offered a 60 million Kenyan shilling ($536,000) reward for information that could lead to their recapture.

The two other escapees from Kamiti Maximum Security Prison were Joseph Juma Odhiambo, jailed for trying to join Somali radical Islamic terrorist group al Shabaab in 2019, and Musharaf Abdalla Akhulunga, arrested for his participation in a foiled 2012 attack on parliament.

Al Shabaab claimed responsibility for the Garissa attack, which was Kenya’s deadliest since the coordinated al Qaeda bombings of the U.S. embassies in Kenya and Tanzania that killed a total of 258 people in 1998.

Al Shabaab has carried out frequent attacks in Kenya to press it to pull its troops out of the African Union peacekeeping force in neighboring Somalia.