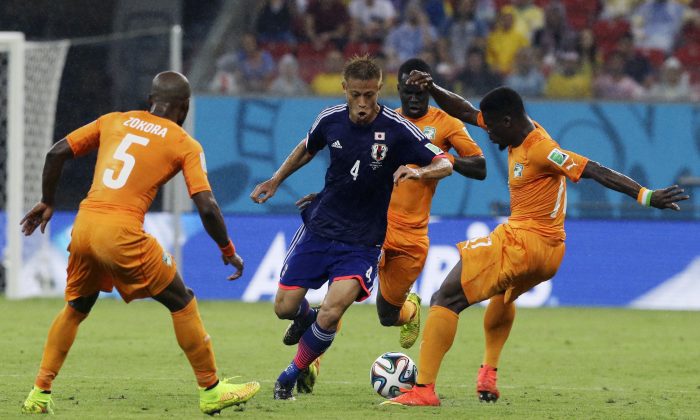 Japan football superstar Keisuke Honda remains upbeat that the Samurai Blue can qualify for the round of 16 at World Cup 2014.

According to the Japan Times, Honda told reporters on Sunday that “Of course there is still a possibility [of advancing to the next round].”

“We can’t qualify now without relying on external forces but I believe in miracles and I am focused on us beating Colombia.”

“It’s not like there is zero chance, that we can’t achieve what I have already said we can achieve. It’s because I have that belief that I am giving it my best shot.”

“If we win then maybe Greece can win. Miracles are miracles and all I can do is believe. We won’t give up until the very last minute.”

Check out an Associated Press article on Japan.

Japan Not Ready to be World Cup Spectators

CUIABA, Brazil (AP) — Japan’s players insisted Monday they will fight to the bitter end as long as they have a shred of a chance to advance to the knockout stages of the World Cup in Tuesday’s final group stage game against Colombia.

“We’re betting everything on this next match,” Japan striker Shinji Okazaki told reporters. “We’re going to give it everything we can.”

To advance, Japan needs to defeat an impressive Colombia and hope that Greece can subdue Ivory Coast.

To fulfill its side of the bargain, Japan needs to do one thing: rediscover a killer instinct in front of goal. Japan had its fair share of chances in its 2-1 loss to Ivory Coast and an abundance of them in its 0-0 draw with Greece, but an inability to convert has left the Blue Samurai on the brink of elimination.

In the run-up to the World Cup, Japan under Italian coach Alberto Zaccheroni honed a fluid attack to cure a history of ineptitude before the net. It was defense that was Japan’s problem. In Brazil, the old habit of poor finishing has come back to haunt Japan.

Pressure has played its role.

“We can’t be thinking too much, ‘this is the World Cup,'” said Okazaki. “We just have to do what we’ve been doing up to now.”

Veteran striker Yoshito Okubo, who fluffed a golden opportunity in Japan’s match against Greece, said he’ll go back to the basics in the next match.

“I just need to position myself before goal,” said Okubo. “Up to now that hasn’t worked well. I just need to keep putting the ball forward.”

Zaccheroni remained coy about whether he would start Manchester United midfielder Shinji Kagawa, a surprise omission from the Greece match.

“Let me repeat what I answered before, it doesn’t depend on a certain player or attacker,” said Zaccheroni. “It depends on the ensemble, on the whole team.”

As the players spoke to media, at least one appeared more interested in the Neymar goal playing on the TV behind him than in talking shop as Brazil marched onward in the tournament.

If Japan is eliminated, at least the Asian champions may have the consolation that their fans made an impression on the world by cleaning up their garbage after each match — even if their team fell short.

“I think what they have done is something that makes us very proud,” said Japan captain Makoto Hasebe.