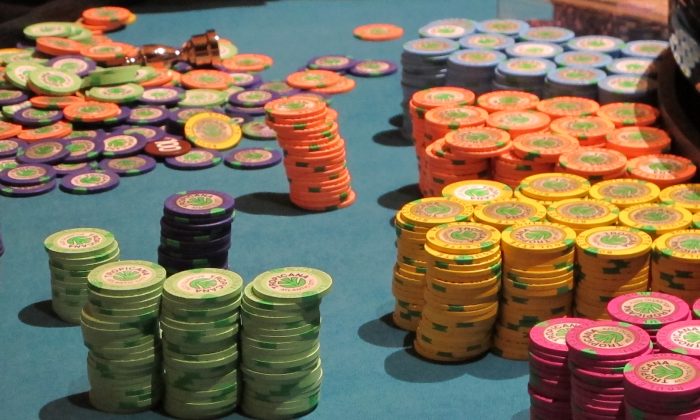 Stacks of gambling chips on a roulette table at the Tropicana Casino and Resort in Atlantic City, N.J., on April 17, 2015. (AP Photo/Wayne Parry)
US

FRANKFORT, Ky.  — A state judge ordered an online poker company to pay Kentucky $870 million and sternly rebuked the company Wednesday for making “a calculation that breaking the law was good for business.”

Casino-style gambling is illegal in Kentucky. Yet between 2006 and 2011, about 34,000 Kentuckians lost more than $290 million wagered on PokerStars.com. Franklin Circuit Judge Thomas Wingate ordered Amaya, PokerStars’ parent company, to give the money back. He then tripled the damages to punish the company for what he said was a willful violation of Kentucky’s laws. And he ordered the state to collect 12 percent interest on the debt until it was paid in full, potentially adding another $104 million a year to the total.

“Without a doubt, the Defendants made a business calculation that took into account the violation of Kentucky’s laws,” Wingate wrote. “However, the law is more than some ordinary itemized expense on a balance sheet, and its value is not as easily accounted for as the Defendants may have thought as they executed their illicit business plan.”

Amaya’s office of general counsel said the company would appeal the judgment.

Sheryl Snyder, Amaya’s attorney, said PokerStars’ gross revenue in online poker from 2006 to 2011 was $18 million. He called the judgment a “gross distortion” of state law.

“The losses were not won by PokerStars; the losses were won by other players. What PokerStars took was its rake out of the pot, its fee for providing the online platform for the players to play,” Snyder said. “To assess against the operator all of the losers’ losses without offsetting their wins, much less considering the revenue that PokerStars was actually deriving is, we think, an excessive punishment.”

None of the 34,000 poker players sued PokerStars to recover their losses. In 2010, the Kentucky Justice and Public Safety Cabinet sued to recover the money. The lawsuit took several years to resolve until August, when Wingate ruled in favor of the state. On Wednesday, he ruled how much money Amaya would have to pay.

Last week, the Poker Players Alliance, a nonprofit that represents 14,000 Kentucky poker players, asked to be allowed to intervene in the case. Wingate has yet to rule on the request, but it would be difficult for the alliance to intervene after the case has been decided.

Wingate noted the laws the state sued under were rooted in the 18th century and said the framers likely never imagined an award as large as $870 million. But he said the framers “also could not have envisaged the scale of illegal gambling enabled by online platforms with the power to take millions of illegal bets from offshore sites worth hundreds of millions of dollars while state authorities sat helpless to suppress the evil.”

Gambling has been a hot political issue in Kentucky for years, with Democrats pushing to allow casino-style gambling as a way to generate more money to help shore up the state’s spending on public education and to help resolve the massive shortfalls in public pension programs for public school teachers and state workers. But those efforts have repeatedly failed to pass the Republican-controlled state Senate, and new Republican Gov. Matt Bevin opposes expanded gambling options as well.

“We are pleased that the result in this extraordinary litigation has come out in favor of the Commonwealth,” Bevin spokeswoman Jessica Ditto said. “The governor looks forward to discussing with his counsel the strategy going forward.”