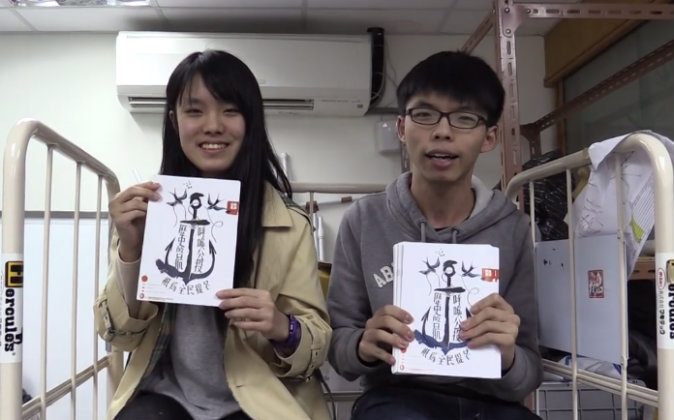 The Umbrella Movement’s best-known teenager is planning some mischief.

“This represents every resident’s appeal, their support for the referendum, and their unwavering determination in the fight for democracy and universal suffrage,” said Wong.

Scholarism, Wong adds, will “DDoS”—Distributed Denial of Service, a type of cyber attack which overwhelms an online service with traffic from numerous sources—the Chief Executive with 100,000 paper pamphlets.

Petitioning politicians and spreading political papers by mail—paper or electronic—may be commonplace in democratic countries, but in semiautonomous Hong Kong, which lives in the shadow of communist China, the material might not always reach its intended audience.

In August 2014, Scholarism tried to mail 82,000 pamphlets which explain the need for peaceful civil disobedience in the city.

However, Hongkong Post—a department under the Hong Kong government—refused to send out them out, citing an article of the “Posting Conditions,” Apple Daily reports.

Hongkong Post said Scholarism’s “Q&A” pamphlets suggest that residents start civil disobedience movements if they are not granted genuine civil nomination. This violates Article 3.7, which states that “no person shall send any illegal, obscene, immoral, indecent, offensive or libelous writing, picture or other things.”

It’s unclear if Hongkong Post will try the same argument and reject the student group’s latest batch of pamphlets, but the two Wongs sound chirpy and determined.

Scholarism is backing a referendum on democratic reform in Hong Kong. Pan-democrat lawmaker Albert Ho plans to trigger a de-facto referendum by resigning his “super seat” after he votes down a government political reform package.

Ho and Scholarism hope that the by-election for Ho’s constituency, which has more than 3 million eligible voters, will force the government to stop backing an immensely unpopular Chinese legislature’s Aug. 31 ruling—Hongkongers get a free vote for the 2017 Chief Executive elections, but can only pick candidates screened by Beijing—and restart a “five-step” political reform process.